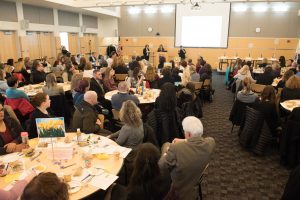 There was a full house at Tuesday’s convocation in the Hartleb Technology Center on the Haverhill campus.

“Celebrate! Change Your Lens, Change Your Life,” was the theme of the Spring 2017 convocation attended by hundreds of Northern Essex Community College faculty and staff on Tuesday, January 17, in the Hartleb Technology Center on the Haverhill campus.

After welcoming attendees to convocation, a time to “…learn, share, celebrate, and look ahead” President Lane Glenn, used Photo-shopped images to playfully share what faculty and staff had been up to (fictitiously) over winter break – he congratulated Professor Deirdre Budzyna for landing a plum role in “Hamilton” and Vice President of Institutional Advancement Jean Poth for her character portrayal at Disney World, to name a few.

Though Bill Heineman, vice president of academic affairs, was under the weather and unable to attend, several administrators took to the dais to update their colleagues on current events at NECC including the continued declining enrollment. 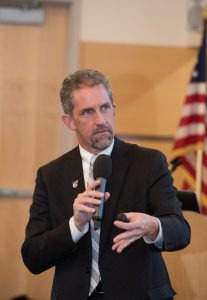 NECC President Lane Glenn spoke to faculty and staff on the topic of optimism.

Kim Burns, dean of academic innovations & interim dean of professional development, noted that not surprisingly NECC’s enrollment is down 10* which follows both state and national trends due to a strong economy and a low high school graduate population. In response, Northern Essex has created a new enrollment dashboard team to address this issue and in particular the problem of retention. Building a better sense of belonging, creating more structure in programs, and integrating students in the college community are all steps that are being considered, she said.

NECC is exploring the idea of centers based on broad academic disciplines where students, full-time and DCE faculty can meet with each other, according to Sharon McDermot, director of NECC’s academic affairs operations. McDermot noted that NECC is in the midst of a program audit.

McDermot also announced that when the Dimitry Building in Lawrence goes off line in May for construction updates, the library will move to the Haffner Building (Amesbury Street) some classes will continue to be held at Riverwalk. The original occupants of the Spurk Building will return once the building is open following renovations.

Updates were given by Ashley Moore, director of career and experiential education, who announced the 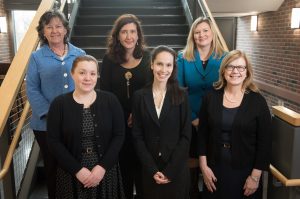 3rd Annual Networking Night will be held Thursday, May 18, and is open to all Northern Essex students. It is organized in partnership with local chambers of commerce, the Lawrence Partnership, and more than 70 local companies. In addition, she announced that a Women in STEM Summit will be held Saturday, April 1, from 8:30 to 1 p.m. on the Haverhill campus.

One highlight of the day was a video by famed photographer Dewitt Jones titled “Celebrate, Change Your Lens, Change Your Life,” who encouraged viewers with the inspirational message to “continually and consciously improve yourself”. President Glenn, a self-avowed optimist, introduced the film 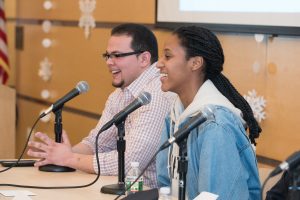 The morning ended with a student panel of five past and current Northern Essex students who shared their experiences with the audience and fielded questions from faculty and staff.

Panelists included Laudys Disla, a criminal justice major; Carlos Garcia, a graduate of the police academy who is now employed by the Lawrence Police Department; Breyer Hall, a graduate of the advanced manufacturing certificate program who is now employed in his field; Gene Carlos Diaz, a 2013 graduate of Lawrence High School, who received a computer science degree from Northern Essex and is now enrolled in Lyndon State College, taking courses on NECC’s Lawrence Campus; and Jenna Naylor, who is balancing her nursing prerequisites with a full-time job and parenting her three children.

Each year, a number of NECC faculty and staff are nominated for the annual NISOD Award. This year was no different. Four NECC employees were nominated and selected to receive the national distinction. They are Donna Felisberto, Newton, NH, coordinator of student assessment, credit for life learning & HSE Chief Examiner; Jennifer Jackson-Stevens, Boston, program coordinator for respiratory care; Marilyn McCarthy, Andover, professor of college reading; and Stephen Russell, Pepperell, professor of history and government.