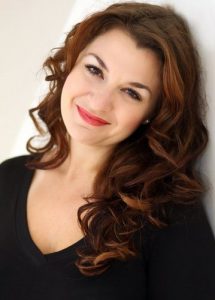 Brianne Beatrice received the 2016 BroadwayWorld Boston Award for Best Actress in a Play.

If students need any evidence that Northern Essex Community College professor Brianne Beatrice knows what she’s talking about when it comes to theater and communication, they need only look to her award shelf. For her performance as Bonnie in a Gloucester Stage Company production of “The Last Schwartz,” the Marblehead-based actor was given the 2016 BroadwayWorld Boston Award for Best Actress in a Play. Voted on by readers of BroadwayWorld.com’s Boston section, the awards shed light on the great work done by people in local theater (a contrast to the larger industry’s focus on New York).

As an adjunct professor, Beatrice teaches a variety of classes at Northern Essex, including public speaking, interpersonal communication and introduction to theater. One could say the character of Bonnie required her to pull a little bit from each of these areas and then some — the difficult role requires the actor to inspire both hysterical laughter and deep empathy from the audience.

“Bonnie converted to Judaism after meeting a man and falling in love, and her sole purpose in life has been to have a family. So at the start of the play, we see this sort of deranged character who’s giving this wacky monologue,” says Beatrice. “But then, in act two, we find out that Bonnie can’t have children and has actually suffered five miscarriages — so she very quickly switches gears from this comedic figure to a more tragic one.”

It’s a challenging dichotomy, but one she handled with aplomb. In a Boston Globe review of the play, theater critic Don Aucoin called her vacillating, high-energy performance “superb.” The toughest part of pulling the performance off, she says, was putting the contrasting characteristics of her true self away in order to fully embody the character’s neurotic tendencies.

“I did all this foundational work about women who suffer miscarriage and what that means to them,” she said, “but the biggest challenge was finding Bonnie all the way through. You know, I kickbox six days a week, I’m a pretty active, aggressive, headstrong woman — and so for me, the bulk of the work was character development.”

While she admits she was pleased and excited about the award, Beatrice says the greatest benefit for receiving it actually goes to her students. Theater can be a difficult field to break into, and seeing the success of someone close to them — particularly someone who’s responsible for teaching them the ropes — can offer a real boost to their morale, she says.

“As an educator, it’s really exciting for my students, because this award serves as a means for them to get excited about their work; for them to say, ‘Hey, my professor’s out there, still doing this, still pursuing a career in acting.’ It helps fuel a drive for them.”

The award also serves as a reminder that, while education is critical, it’s also important to pay attention to what’s actually going on in the industry. Beatrice’s approach to teaching has just as much to do with practical details — such as who to network with and how to audition — as it does with method and theory.

Despite wearing many hats — including actor, educator and director — Beatrice says, at the end of the day, she doesn’t think of herself as favoring any one more than the other. Instead, she sees her life as a constant collaboration between these positions, all revolving around her dedication to theater.

NECC offers an associate degree in liberal arts: theatre option which gives students the opportunity to sample various aspects of theater. Individuals can take courses in acting, directing, improvisation, children’s theater and may earn credits for working on college productions in stage management and technical theater.

The college also offers an associate degree in liberal arts: journalism/communication option, which prepares students for careers in the fields of print and broadcast journalism, corporate communications, public relations and more.