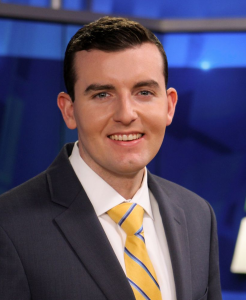 Weather is so much more than just the forecast.

Atkinson native and New Hampshire meteorologist Ryan Breton will discuss why he was attracted to the field and how it relates to science, technology, engineering, and math (STEM) fields during Northern Essex Community College’s February 17th STEM Speakers Series lecture titled “Beyond the Forecast: Using STEM in the Real World” .

This event, which is free and open to the public, will be held at noon on Friday, February 17, in the Hartleb Technology Center on the Haverhill campus.

NECC’s STEM Speaker’s Series, designed to introduce a wide range of STEM topics to the general public, is funded by a grant from the Massachusetts Department of Education’s STEM Starter Academy, which is an initiative of the 15 Massachusetts community colleges to inform, engage, recruit, retain, and graduate more students in science, technology, engineering, and math, through STEM Pathway programs leading to job placement or transfer to university STEM programs.

Breton is currently employed as a meteorologist at NH1 News. He has had a fascination with New England weather for as long as he can remember. In 2006, Breton developed a local weather website to hone his forecasting skills and gained a loyal following in the Merrimack Valley.

Breton graduated with a meteorology degree from Pennsylvania State University, where he was president of the Campus Weather Service and part of WPSU-TV’s Emmy award-winning Centre County Report. He earned several awards at Penn State, including the award for outstanding achievement in broadcast meteorology and the prestigious GEMS Diamond Award for leadership and service. He interned for two summers with the weather team at WCVB-TV in Boston. In addition to his on-air duties, Ryan develops weather content for NH1.com and shares his passion for weather with local groups and schools.