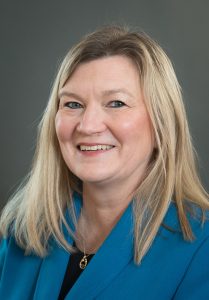 What do The Boston Ballet, the Trustees of Reservations, and Northern Essex Community College have in common?

Well, the question is really who do they have in common and that would be Michelle Tremblay, NECC’s new controller/director of budgets, a 1987 graduate of the college.

The Groveland resident, spent the last decade as the chief finance officer/director of finance for the two powerhouse nonprofits before settling in to her new role at Northern Essex.

A 1984 graduate of Pentucket High School, Tremblay is not new to the campus. She earned her associate degree in business transfer with a focus on accounting before going to work for New England Telephone. She went on to earn her bachelor’s degree in accounting as an evening student at Franklin Pierce College. That led to a 14-year career with the Verizon Yellow Pages. Later, she worked at Hasbro Interactive and Lawrence General Hospital before heading to Boston as the controller for the Boston Ballet.

While working to make the Boston Ballet financially sound was personally fulfilling, Tremblay eventually found the long commute and even longer hours took away valuable time from being a wife and mom to four and step-mom to three. So, after six years she headed to Beverly to work for the Trustees of Reservations. After just three years, the Trustees pulled up stakes and relocated to Boston and Tremblay decided to leave rather than take on that commute again.

“By then I had decided I would like to get into the field of education,” she says. “I was working as a contractor when I saw the posting for the job here.”

She didn’t hesitate to apply.

“This is such a great institution. It has such an important mission and I’m privileged to help support that mission. The school has always meant so much to me and my family.”

Her connections to the school run deep. Tremblay’s sister, mother, and daughter all earned their associate degrees from Northern Essex and she has two more daughters interested in attending.

In addition to reporting where an organization has been fiscally, Tremblay says, she enjoys the challenge of “redirecting expenses” to “generate money” for the college.

“I look for ideas to support the organization as a whole to make it financially strong,” she says. “We work with all of the departments to accomplish this…we don’t exist in a silo. We are here to support each other in order to grow this amazing college.”