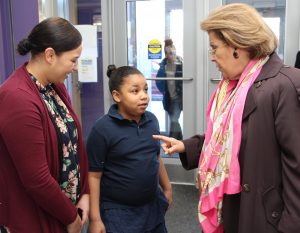 Dr. Antonia Novello, the first woman and the first Latino to be named surgeon general of the United States, visited Northern Essex Community College’s Lawrence Campus on Wednesday, March 22 to share how she rose from humble beginnings in a small village in Puerto Rico to be the leading doctor in the country.

She encouraged the audience of Lawrence High School and Northern Essex students, telling them “if I was sick as a child and can be surgeon general, you can do it, too.”

Dr. Novello, who was named surgeon general by President George Bush in 1990, had medical issues as a child but didn’t have access to the surgery needed to correct those issues until she was 18 years old.  The daughter of the local school principal, she was always expected to work hard and her illness was no excuse.  She attended the University of Puerto Rico when she was just 15 years old, eventually earning a bachelor’s degree and a medical degree. Later, she completed medical training in nephrology, the study of the kidneys, at the University of Michigan.

Strutting down the aisle with a microphone and calling herself “the Oprah of the Latino community,” Dr. Novello engaged the audience with humor and straightforward advice. 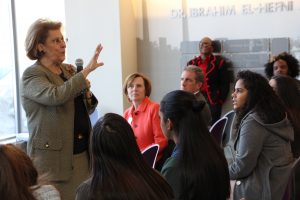 She stressed the importance of education, the opportunities provided by internships and fellowships, and the value of always having “a friend who believes in you.”

She advised the primarily Latino audience “to walk with people who look different from you so you have to get out of your comfort zone” but to always stay connected with your own group because “they understand your values.”

Dr. Novello’s presentation was sponsored by Salem State University, the Boston Chapter of the Association for Latino Professors for America (ALPFA) and Northern Essex.

NECC President Lane Glenn introduced Dr. Novello and welcomed everyone to the El-Hefni Allied Health & Technology Center, 414 Common St., which is where most of NECC’s health care programs are taught.

“In this building, we prepare students from the city of Lawrence and from communities all over the Merrimack Valley for high demand careers in the health care field,” he said.

In addition to serving as surgeon general, Dr. Novello was the New York State Health Commissioner from 1999 to 2006.

Throughout her career and especially during her time as surgeon general, Dr. Novello has focused on improving medical issues that dramatically impact the public health such as smoking, AIDS, diet and nutrition, environmental health hazards, and immunization and disease prevention.

“Dr. Novello is a role model for women and Latinos and a leader in addressing major health issues across the country.  It is an honor and a privilege to have her speak at Northern Essex,” said President Glenn.