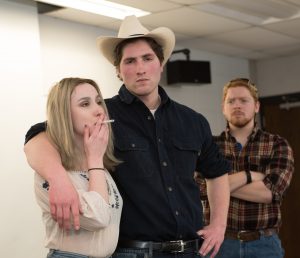 Leah Mahoney of Middleton as Elizabeth, Grant Bellino of Amesbury as Roy and Ben Joyall of Groveland as Ray in the Top Notch Players’ productions of “Laundry and Bourbon” and “Lone Star.”

James McLure’s “Laundry and Bourbon” and “Lone Star” are technically two separate one-act plays, but the unique ways they capture the spirit of the American South often lead them to be shown one right after the other.

That double feature is exactly what attendees of the Northern Essex Community College Top Notch Players’ latest show will be treated to during their Spring production, which runs from April 6 – 8 and 12 – 15. All performances will begin at 7:30 p.m. and will be held at Room E155 on the Haverhill campus, 100 Elliott Street.

McLure’s “Laundry and Bourbon” takes place on a back porch in Maynard, Texas, on a hot summer afternoon, as Elizabeth and her friend Hattie gossip about the many open secrets that are so much a part of small town life… while the former tries to cope with the turmoil of her husband, who has returned from Vietnam a changed man.

“Lone Star” takes the perspective of Elizabeth’s husband Roy and his brother Ray in the cluttered backyard of a small town Texas bar. Once a local high school hero, he’s now forced to deal with the aftermath of his time in Vietnam… and the things that went on in town while he was gone. 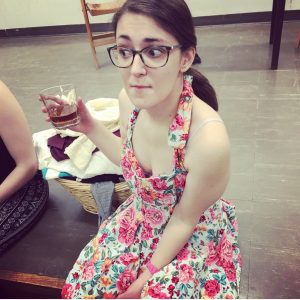 While both plays deal with serious subject matter, they are primarily comedies, making great use of McLure’s signature breezy Southern dialogue.

Available at the door, tickets are $12 for general admission and $10 for students and seniors.

The production will be directed by NECC theatre and communication professor Brianne Beatrice.