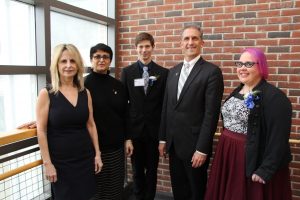 Students of Northern Essex Community College’s Beta Omicron chapter of the Alpha Beta Gamma International Business society received awards at the organization’s 30th induction ceremony held April 19. This anniversary marked a significant milestone for NECC’s chapter, which — in addition to its remarkable longevity — has accrued 79 national awards over the course of its history.

Stephanie Quezada, of Lawrence, was honored with the Hausman Siegel Distinguished Award, which is given to an outstanding chapter president. For coming up with a superior business plan, Cheryl Adams-Noyes, of Newburyport, garnered the Nathan Ancell Memorial Award. John Bradley, of Haverhill, was the recipient of the Eva Bobrow Medallion Award, which recognizes a member who has made significant contributions to their chapter.

Mann and Winfield Field, of North Reading, received special chapter-specific recognition from Beta Omicron, with both getting the Muller & Norton Outstanding Leadership Award for their exemplary leadership and devotion to Alpha Beta Gamma activities. The award is named for Sheila Muller and Pamela Norton, who were crucial to the development of NECC’s ABG chapter.

The entire Beta Omicron chapter was itself recognized with a pair of awards during the meeting: the Excellence in Financial Management Award, given to the chapter that goes above and beyond when it comes to fundraising and cash flow management; and the Brooks College Golden Key, which recognizes the most outstanding two-year college chapter in Alpha Beta Gamma. This is the seventh time in eight years that NECC’s chapter has received this particular honor.

This year’s Beta Omicron induction ceremony welcomed over 40 initiates including: 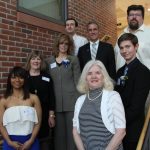 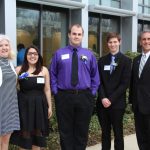 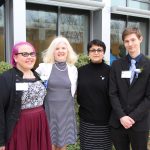 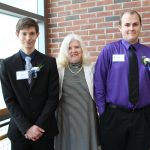 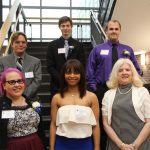