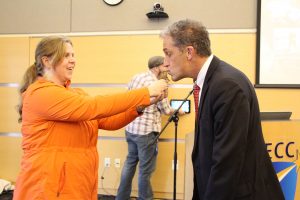 Northern Essex Community College President Lane Glenn will do almost anything to help out a student and he proved that earlier this week when he kissed a frog in front of a couple hundred people attending the general staff meeting.

Glenn was the “winner” of the recent Kiss the Frog fundraiser, which raised over $1,300 for the NECC Professional Association (NECCPA) student scholarship.

Just before leaning in for a kiss, Glenn gave a shout-out to NECC Early Childhood Education student Daniela Chavez-Hernandez, who will receive the $1,000 scholarship.

He said “This one’s for you, Daniela!”

Four NECC faculty members plus President Glenn vied for the opportunity to kiss the frog including Sociology Professor Kathy Holmes, Computer and Information Science Professor Ethel Schuster, Chemistry  Professor Mike Cross, and Math Professor Steve Proietti.   Faculty, staff, and students who donated to the campaign were asked to choose who they would most like to see kiss the frog and Glenn was the winner. 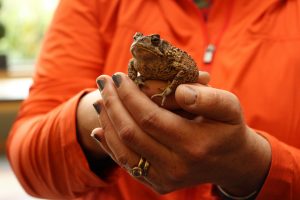 It was a handsome frog.

This year’s NECCPA scholarship for $1000 was awarded to Daniela Chavez-Hernandez of Dracut, an aspiring social worker with an almost perfect grade point average, who has been selected to represent her class as student commencement speaker at the graduation on May 20.