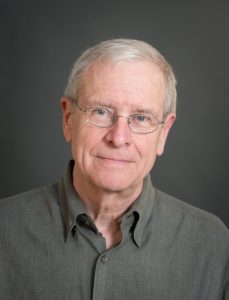 Northern Essex Community College Professor and Accessible Media Specialist Lance Hidy, of Merrimac, was recently recognized at the 2017 New England Book Show awards gala, which took place on May 9 at Symphony Hall in Boston. He won awards for his graphic design work on two books, taking home fourth place for “Heart of the Brush: The Splendor of East Asian Calligraphy” and second place for “A Plea for the Animals,” both published by Shambala Publications.

Hidy’s work also recently appeared in an article for quarterly magazine Letter Arts Review entitled “Letter Culture: The Enduring Influence of Lloyd Reynolds.” Reynolds, a former professor at Reed College, is notable for his contributions to academia on the subjects of calligraphy, graphic design and typography. As a former student of Reynolds — and one with the most complete surviving record of his lectures, to boot — Hidy was uniquely positioned to provide many illustrations for the article, which appeared in the Summer 2016 issue of the magazine.

Lance Hidy is a native of Portland, Ore. who got his start in design and illustration after graduating from Yale University and studying privately with the sculptor and printmaker Leonard Baskin. In 1969, he co-founded the company David R. Godine, Publisher and four years later established a design firm of his own. By the 1980s, Hidy had gained a strong reputation for his expertise in poster art and illustration, eventually serving as the art director of the Harvard Business Review and designing three U.S. postage stamps. Hidy currently teaches graphic design and is an accessible media specialist at Northern Essex Community College.

Northern Essex offers an associate degree in general studies: art that allows students the flexibility to explore and experience the breadth of the arts. Graduates of this program are able pursue many career paths, including photography, visual arts, graphic design and multimedia. Many students also transfer to four-year colleges and universities for the above fields.

With campuses in Haverhill and Lawrence, Northern Essex Community College offers over 70 associate degree and certificate programs as well as hundreds of noncredit courses designed for personal enrichment and career growth. Each year, 8,500 students are enrolled in credit associate degree and certificate programs on the Haverhill and Lawrence campuses; and another 2,600 take noncredit workforce development and community education classes on campus, and at businesses and community sites across the Merrimack Valley. Northern Essex is the only state college located in the lower Merrimack Valley Region of Massachusetts. For more information, visit the website at www.necc.mass.edu.