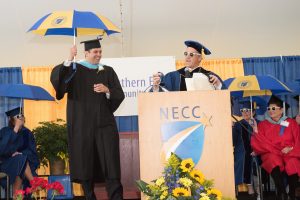 After Matt Noyes (left in photo) delivered his commencement speech, NECC President Lane Glenn (right in photo) said “meteorologists and community college students need to be prepared for everything” which was the cue for those sitting on the platform stage to raise umbrellas and don sunglasses.

NBC Boston Chief Meteorologist Matt Noyes was the Northern Essex Community College Commencement Speaker on May 20, and many of the close to 1,000 graduates and their guests gave him credit for the perfect weather.

It was in the 60’s, sunny, and breezy all day Saturday, ideal for the commencement, which was held under a massive 3,000 person tent set up in the quadrangle on the college’s Haverhill Campus.

Noyes, a lifelong resident of Haverhill, spoke about authenticity and shared some of the challenges he’s faced in his life.

“My post-college story included gaining 60 pounds, a failed marriage by 32, moving back in with my Mom, getting 3 hours of sleep a night to be the parent I needed to be, and falling tens of thousands of dollars in to debt.”

“Now what if I told you about the other side of that?  Hey folks, I lost 60 pounds then ran the Boston Marathon and raised $14,000 for kids with liver disease, I had an amazing son, met the woman of my dreams, I own a house in my lifelong hometown of Haverhill and I cherish every day?”

Noyes advised the graduates not to “bury the junk—and pretend it never happened.” “Your baggage, my baggage, all of our baggage—it’s an unavoidable tell-tale sign of a well-traveled life.” 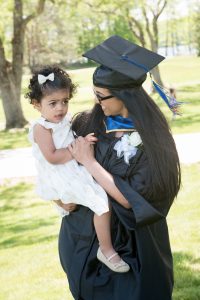 Daniela Chavez-Hernandez of Dracut, who graduated with an Associate Degree in Early Childhood Education was the student commencement speaker.  Chavez-Hernandez has an almost perfect 3.9 GPA and she has been accepted to Salem State and Tufts universities.  The full-time preschool teacher in Lawrence and mother of a two-year daughter is currently weighing her options.

A Mexican immigrant, Chavez-Hernandez hoped to dispel some myths about immigrants with her speech by sharing her story of hard work and a commitment to higher education.

“In my opinion, what makes NECC a great institution, and is truly its biggest strength, is its diversity among students, professors, advisors, and administrative staff….I’m thankful to be part of a community working towards acceptance and understanding of differences, one that embraces what makes us unique.”

The commencement proceedings opened with the national anthem sung by NECC alumna Carli Hamilton of Plaistow, N.H., who is currently attending Berklee School of Music.

Alumnus Bill Klueber, who is chairperson of the NECC Alumni Association, presented the Outstanding Alumni Award to Jason Moury of Winchendon, a 2006 graduate of the college’s Respiratory Therapy Program who went on to earn a bachelor’s and a master’s in public health.

Moury is now the vice president of operations management for the COPD Foundation, an organization with a mission of preventing and curing Chronic Obstructive Pulmonary Disease and improving the lives of all people affected by COPD. 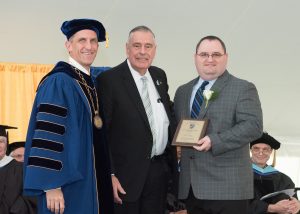 The Outstanding Alumni Award is presented annually to an NECC alumnus who has achieved success in his or her profession, is active in the community, or has continuously supported the college’s efforts.

For the first time this year, the college awarded an Honorary Associate Degree in Business to Terry Stubbs, CEO of ActivMed Practices & Research, Inc, a clinical research trial company, which has four locations in Methuen, Lawrence, Beverly, and Portsmouth, NH.

ActiveMed is in the top two percent of women owned companies in the United States.  Stubbs, who has a certificate in medical transcription from Northern Essex, is partnering with the college on a clinical research coordinator advanced certificate program which is now accepting students for the fall semester.  This program is designed to prepare students for high demand jobs in clinical research trials.

HC Media live streamed the entire commencement ceremony so those not able to attend could watch. 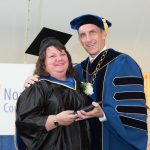 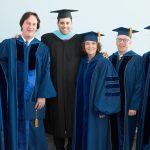 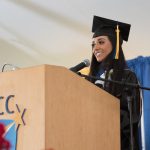 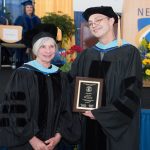 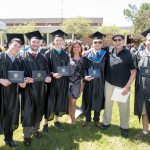 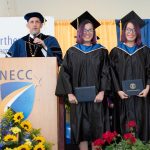