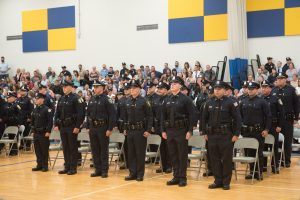 Members of the 2017 NECC/Methuen Police Academy stand at attention during their recent graduation ceremony on the Haverhill campus.

ValleyWorks Career Center, a multi-million dollar Hospitality and Culinary Arts Institute, and thriving law enforcement academies were just a few of the topics Northern Essex Community College President Lane Glenn touched upon in what has become an annual, courtesy update to the Haverhill City Council.

Glenn was introduced to speak to the council by Councilor Mary Ellen Daly O’Brien, who is also a member of the NECC Board of Trustees.

He noted that with roots in Haverhill that go back to 1961 when Northern Essex opened its doors in the former Greenleaf Elementary School in Bradford with just 181 students, it has grown considerably. It now has close to 6,000 students enrolled in more than 70 degree and certificate programs, with a growing Lawrence campus in addition to the Haverhill campus.

Northern Essex has been actively pursuing a number of new initiatives including assuming the operation of the ValleyWorks Career Center with locations in both Haverhill and Lawrence. NECC has played host to the Center for the past few years, but hopes to return it to the Haverhill downtown.

In addition, Northern Essex just this week put out a Request for Proposals from developers for space for both the Career Center and for a new multi-million dollar Hospitality and Culinary Arts Institute in partnership with Endicott College in Beverly and Haverhill’s Whittier Regional Vocational Technical High School.

On Friday, July 14, Northern Essex celebrated the fourth graduating class of the Northern Essex Community College/Methuen Police Academy. More than 200 officers have graduated since it began in 2015 and are working in police departments across the state, he said. The academy, was launched, in part, because of a conversation he had with Haverhill Police Chief Alan DeNaro, who mentioned that officers in the city would wait months for openings in academies far away. NECC worked with Chief DeNaro, other area police departments, and the Municipal Police Training Council to create  a local academy that has “quickly become one of the most popular and successful academies in the state.” 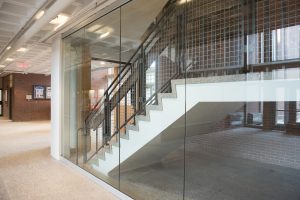 The main staircase in the Spurk Building is one of the many areas that received an update.

Glenn was happy to report that after a year “offline” the Spurk Building, the main classroom building and one of the oldest buildings on campus, constructed in 1971, is about to reopen following a $15 million renovation project. Improvements include new windows, heating and air conditioning systems, updated entryways, and handicap accessible bathrooms.

Now that Spurk is nearly ready to be occupied, the Dimitry Building on the Lawrence campus is going offline to undergo a similar face-lift, Glenn explained. In addition, NECC’s Workforce Development & Corporate Relations division, which was most recently located at the Riverwalk in Lawrence, has moved to the first floor of the neighboring Opportunity Works building in Haverhill.

Last year, Northern Essex was the first public college in the state to offer a “competency-based” certificate. Competency-based learning allows students to demonstrate what they know so they can move through classes if not entire programs at their own speed. Now, Northern Essex is taking the lead on a grant project from the Massachusetts Department of Higher Education that will create an online, competency-based degree in Early Childhood Education. There is an early childhood education “crisis” in Massachusetts, he noted. “There simply aren’t enough early childhood educators,” he said. Now students can access the program entirely online. Northern Essex is rapidly becoming the model for this program, Glenn said. 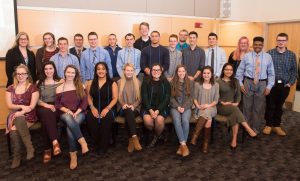 Lastly, Glenn told the Council about a graduation held on the Haverhill campus for 28 Haverhill High School students who completed the NECC Early College program. Combined, they earned 721 college credits for an estimated cost savings of $1 million in private college tuition.

He explained that the program has been further revised for this fall – all Early College courses will be offered on campus so the students will have the opportunity to have a full college experience including joining clubs, using the gym, library and tutoring centers, and participating in student engagement activities.

Councilor Joseph Bevilacqua, whose late uncle Francis J. Bevilacqua, a former state representative, was instrumental in the founding of Northern Essex, said he was proud of his family[‘s involvement in creating “an alternative opportunity for so many”.