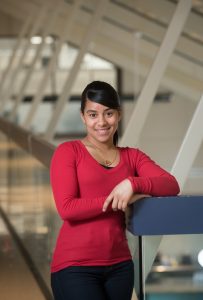 Crisleidy Paula of Lawrence attributes the direction of her education, as well as her life, to the time she spent being bounced from place to place from a very young age, including her move to this country from the Dominican Republic in 2014 when she was 16 years old.

“Since I was a little kid, I have moved three or four times from school to school,” she says. “And I would have never made it without help from school counselors, who were really supportive and encouraged me to keep going.”

A 2015 graduate of Lawrence High School, Crisleidy now wants to offer similar inspiration to other students like her: specifically, those that have many challenges on top of classroom time and homework. She wants to become a school counselor, and the first step in her journey was the Associate Degree in Liberal Arts: Psychology which she received from Northern Essex with high honors in May.

Crisleidy’s associate degree transferred easily to UMass Lowell, where she will attend in the fall, and, as a community college transfer student, she received a significant discount in her tuition.   Her goal is a bachelor’s degree in psychology, and eventually she wants to continue for a master’s in counseling.

“Growing up in the Dominican Republic, there weren’t as many transfer options,” she says.  “I wasn’t sure how to get started, and it would not have been possible without the help of all the supportive and caring people who work at the college.”

When she becomes a school counselor, Crisleidy will be a role model for her future students, showing them what they, too, can accomplish.

“I wasn’t sure how to get started, and it would not have been possible without the help of all the supportive and caring people who work at the college.”

Haverhill and Lawrence, MA (August 23, 2022)- Congratulations to the Northern Essex Community College students on the Summer 2022 Dean’s List! To be included, students must attain a grade point average of 3.3 or higher within the term, carry six…
More articles »

Haverhill, MA (September 6, 2022) –Northern Essex Community College launched the start of a new semester with the Fall 2022 Convocation on September 6. Members of the NECC community gathered on the Haverhill Campus to explore the theme Empowering Students…
More articles »