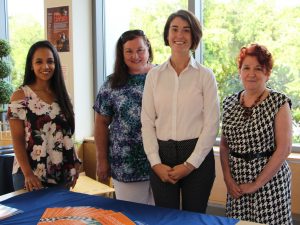 Children at home, a job, or fears about whether you can be successful shouldn’t stop you from continuing your education, according to the four panelists who spoke at Northern Essex Community College’s Women Returning to School Information Session on Tuesday evening, August 7.

Presented by Enrollment Services, the panel featured Allison Belisle of Haverhill, 2017 Nursing graduate; Daniela Chavez-Hernandez of Dracut, 2017 Early Childhood Education graduate, Patricia Lyon of Methuen, 2013 Business Management graduate, and Charlene Woodard of Haverhill, 2009 Business Management graduate.  Each shared their own story and offered advice for the audience of 30 women and one brave man, who was there supporting his wife.

Tricia Lyon, a divorced mother of two teens, said it took her a year after getting accepted to muster up the courage to sign up for her first class.  Once she got started, she found she loved school.  “I loved the validation.  I couldn’t believe the feedback I got from my professors.”

She’s continued her studies, earning a bachelor’s from UMass Lowell this spring, and now considers herself a life-long learner.  “I want to keep going to classes even if they have to wheel me in with my oxygen.”

Charlene Woodard dropped out of high school at 16, had four children, and, after getting her GED at 29, landed a job at Northern Essex.  She didn’t see herself as a college student, but a student working in her department encouraged her to give it a try, so she did.

Now, over two decades later, she has an associate degree, a bachelor’s from Southern New Hampshire University, and, next spring, she’ll have a master’s from Saint Joseph College.

Woodard confirmed how rewarding the validation is, sharing the joy she felt when she got an “A” on her first quiz in her accounting class.  While she started with traditional classroom courses, most of her coursework has been online, which works best since she works full-time.

Daniela Chavez-Hernandez of Dracut was selected as this year’s student commencement speaker and, in the fall, she is enrolled at Tufts University, but what she focused on were the challenges she faced on her path to a degree.  She came to this country from Mexico at 16, knowing no English, and, after graduating from high school, was in an abusive relationship which she was finally able to free herself from.

The mother of a two-year old and full-time preschool teacher, said “If I share this story it’s because I want to serve as an inspiration to you.  I’m not any smarter than you, I just had a dream.  You must have a dream since you’re in this room.”

Allison Belisle always dreamed of being a nurse but she had dropped out of college once and didn’t think she was up to the academic rigor of a nursing program.

It was after earning an associate degree in communications and having her now three-year old son that she finally had the courage to go for it, enrolling in the nursing program at Northern Essex.

Belisle advised others not to listen to the naysayers.  “I met an academic advisor at NECC who told me I was a great candidate for the nursing program,” she said.  “NECC gave me a second chance.  I’m not a college dropout; I’m a registered nurse.”

Also speaking at the event were Danny Richer, director of recruitment and admissions, and Alexis Fishbone, chief financial officer and veterans’ coordinator.

“Sixty percent of our students are women,” said Richer, “And many are balancing their college work with family and work responsibilities.  This event was designed to inspire others.”

It’s not too late to register for the fall semester at Northern Essex, which begins September 6.  For more information, visit the website www.necc.mass.edu or contact enrollment services, admissions@necc.mass.edu or 978 556-3700.