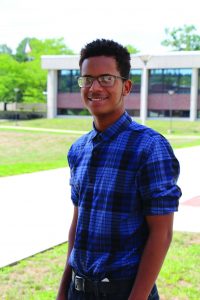 When Maireny Rodriguez moved to Lawrence from the Dominican Republic he was 18, couldn’t speak English, but dreamed of becoming an engineer.

In fact, NECC played an early role in his college education. Following graduation from Lawrence High School, the honors student enrolled in the Bridge Program through NECC’s Student Success Center. This prepped him for the rigors of college life. In addition, the Pathways to Academic & Career Excellence (PACE) Program, a federally-funded student support program, kept him on track.

“My first semester at NECC I was lost. I had no knowledge of college life and was afraid I wouldn’t finish the semester,” he said. “However, through the different NECC support services I was welcomed and mentored by people who believed in my potential. I was prepared to achieve my long- and short-term goals.”

His goals were formulated as a youngster. He would tie together cables from broken electronic devices hoping to create a robot. While a robot never materialized, a curiosity in electronics did.

After earning his Associate Degree in Engineering Science he will pursue a Bachelor’s Degree in Computer Engineering at UMass Lowell.

“A college education is pretty expensive,” he said. “But it is an investment in life that I’m pretty sure is going to be worthwhile in the end.”

To learn more about enrolling at Northern Essex, visit the website or contact Enrollment Services at, admissions@necc.mass.edu or 978-556-3700.