Author of “Latino City” to Speak at NECC 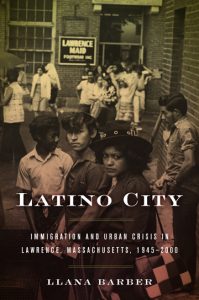 Llana Barber, author of “Latino City” will read from her book and talk about the research that went into it.

Even as a teacher in the Lawrence school system, Llana Barber knew she would one day share the story of the old mill city and its residents.

That story unfolds in her book “Latino City: Immigration and Urban Crisis in Lawrence, Massachusetts, 1945-2000,” which was published earlier this year by The University of North Carolina Press Chapel Hill.

Author and historian, Barber spent 10 years researching and writing her doctoral dissertation which became “Latino City”. The work weaves together the ruins of industrial America with the migration of Latinos to the United States.

“Professor Barber has written a compelling narrative of how Lawrence changed and evolved as a city during the second half of the 20th century, and it is important for students of all disciplines to understand how those changes have shaped their community, ” said Mike Hearn, NECC’s director of library services.

Originally from New York, Barber moved to Lawrence for a short time in 2003 to be near family. With an undergraduate degree from UC Berkeley, she worked as a writing specialist for grades five through eight at the Guilmette Middle School in Lawrence. She left teaching to pursue a PhD in history at Boston College in 2004.

“When it came time to choose a topic for my dissertation, there was simply no doubt that Lawrence’s history would be my focus,” Barber said. “Not only was it an inherently fascinating story, but it captured the intersection of what many historians consider the most important developments of the late 20th century: immigration and urban crisis. I spent ten years working on this project, traveling frequently to Lawrence and Boston to conduct interviews and spend time in an array of archives. Given the controversy surrounding the city, I considered it essential to ground this story in mountains of evidence, and like any scholarly history, the years of careful research were actually far more important that the writing that followed.”

Barber now lives back in New York, where she teaches in the American Studies department at the State University of New York College at Old Westbury.

The event is being sponsored by the NECC Library. The Bentley Library owns several copies of the book which can be located through the online catalog, or by contacting the library.