Involvement in Student Activities Leads to Success at NECC and Beyond 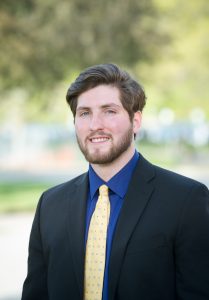 Participating in everything from the Top Notch Players theater group to the Student Senate and the basketball team, Grant Bellino‘s involvement on the campus earned him the nickname Mr. NECC. Through all this, he discovered a passion for meeting, interacting with, and advocating for all different kinds of people — ultimately leading him to the goal of running for public office, which he plans to do in the future.

When Grant took his first chance at higher education, after graduating from Amesbury High School in 2013, he admits he wasn’t even close to being ready for it. A general lack of enthusiasm for learning made it difficult for him to put the effort into college.

Unfortunately, that lack of maturity came through in his grades, leaving him with a not-so-stellar 0.87 GPA after his first semester … and even less motivation than before.

Luckily, that was just the beginning of Grant’s story. After receiving a copy of Robinson Crusoe and with a little encouragement from his grandfather, the 21-year-old discovered a passion for philosophy he didn’t know he had. That made him a natural fit, he says, for the Liberal Arts: Philosophy Program at NECC.

With his new focus, Grant returned to campus, bumping his GPA up to a 3.06 and immersing himself in a daunting number of extracurricular activities.

“By getting involved in extracurricular activities, I learned so much about myself,” he says. “It, more than anything, helped shape my goals for the future.”

In the fall, Grant will transfer to UMass Amherst as a junior and then plans on attending law school.

To learn more about enrolling at Northern Essex, visit the website or contact Enrollment Services at, admissions@necc.mass.edu or 978-556-3700.