Nursing is Her Calling 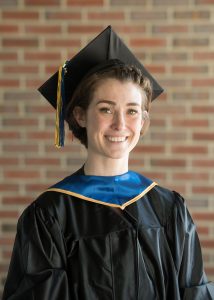 Allison Belisle of Haverhill always had an interest in nursing, but it took some time for her to realize it was truly her calling.

After graduating from Haverhill High School in 2009, Allison attended a small private school in Pennsylvania, where she majored in German planning to be a teacher.

When she became disillusioned with that, she returned home to Haverhill, and, at the urging of her father, enrolled in college close to home at Northern Essex.

That led to an Associate Degree in Liberal Arts: Journalism/Communications from Northern Essex in 2014 but, still, she couldn’t stop thinking about nursing. Allison decided it was time to listen to her instincts. She took her prerequisite science courses and jumped right in, starting Nursing I in the fall of 2014 when her now three-year old son Cooper was just one-year old.

Balancing classes, studying, and clinical rotations with being a wife and mother wasn’t easy but Belisle credits her family for their support.

Her mother and her mother-in-law provided child care during the week and her  husband, Bryan, did whatever he could to help. As she says “he carried me through.”

This spring, she received a nursing associate degree with high honors from Northern Essex, and she’s now studying for her nursing boards and interviewing for jobs. Her summer plans include a trip to Germany with her son to visit her maternal grandparents.

In the fall, she will continue on for a bachelor’s degree in nursing, attending an online program or Regis North which offers bachelor’s degrees on NECC’s Lawrence Campus. Eventually, she’d like to earn a master’s degree and teach nursing. “It feels surreal. I can’t believe I made it through,” she says. “I’m excited to get into the field, where I’m meant to be.”