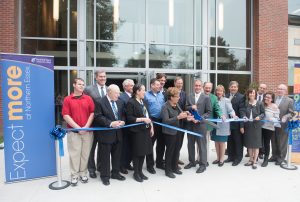 At the Tuesday, September 19 celebration of Northern Essex Community College’s newly renovated Spurk Building, the focus was on the importance of what takes place in the building, one of the most heavily used buildings on the Haverhill Campus.

“This building is the hub of our campus,” said NECC President Lane Glenn.  “It’s where most of our teaching and learning takes place; it’s where our students congregate and socialize; and it’s a place that members of the community frequently visit for performances and lectures.”

Referring to the many students who are preparing for careers, Senator Kathleen O’Connor Ives, who is a member of the Joint Higher Education Committee and spoke on behalf of the college’s legislative delegation, said the Spurk Building is “More than just a building; it’s a space where dreams become reality.”

And Bill Heineman, vice president of academic and student affairs who was representing the college’s faculty, staff, and students, said “If you wonder what we do in this building, there’s a simple and profound answer, we change people’s lives.” 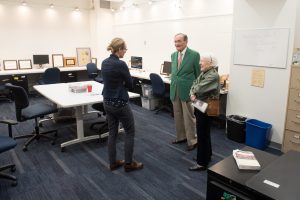 The 89,000 square foot building, which is almost 50 years old, has been closed for a year, undergoing an $18 million renovation, funded by the state.  The project was managed by the state’s Division of Capital Asset Management and Maintenance (DCAMM).

From new windows, flooring and audiovisual equipment in the classrooms to a new HVAC system, new restrooms and accessibility upgrades for the entire building, Spurk is now an optimal spot to take—and teach—classes.

Peyser said that this renovation project is part of a statewide plan to fix existing facilities rather than build new ones.  “We want to create more flexible and inviting space.   It’s all about student success.” 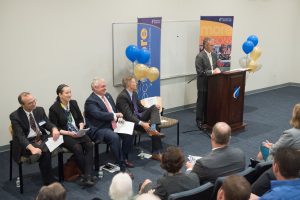 Secretary Heffernan echoed Peyser’s comments, explaining that the theme for the state’s capital budget is “taking care of what we have.”  “This building had good bones but it was a classic 1970 building.  We improved accessibility, air conditioned the entire building, replaced every existing window, and updated fire protection.  These upgrades have made a critical building more usable.”

In addition to 33 classrooms and 54 faculty offices, the Spurk Building is home to centers created to support students, such as the Career Center, the Business & Accounting Academic Center, the Academic Coaching Center, the Reading and Writing Center; and Honors Lounge; gathering and performance spaces, including Lecture Hall A and the Chester Hawrylciw Theater; and spaces designed for faculty and staff innovation, such as the Professional Development Center and the Center for Instructional Technology.

The Spurk Building was constructed in 1971 as part of the college’s first permanent campus.  In the early 1990’s, it was named in memory of Dr. John Spurk, formerly of Haverhill, a professor of history & government at Northern Essex for 24 years until his retirement in 1991.  Dr. Spurk died in December of 1991.  He was a respected and well-loved member of the college community who played a key role in the development of the college. Each year the Dr. John Spurk Memorial Scholarship is presented to a Liberal Arts major who resides in the Merrimack Valley region and is involved in Community Leadership/Service.

As part of the program, President Glenn announced that a college history written by John Spurk is being published and will be available within days.  John Dimitry, who served as the second president of Northern Essex from 1975 to 1996 and was at the event with his wife Audrey, asked Spurk to write the history in 1986.  He completed it in the late 1980s and it has been part of the college’s archives since then.  Mike Hearn, the college’s director of libraries, can be credited with providing the leadership to get the history published, along with an update covering 1986 to the present written by Mary Wilson, dean emeritus of the college, with contributions from Wendy Shaffer, dean of development. 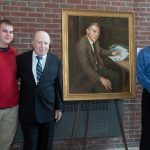 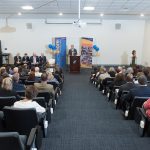 The newly renovated Lecture Hall A 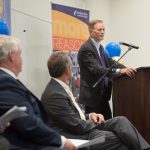 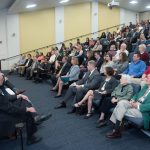 A full house of current and past faculty, staff, and students 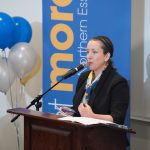 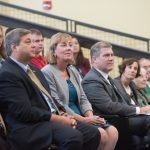 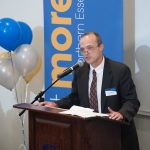 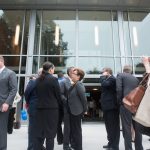 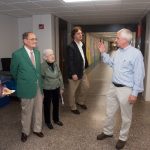 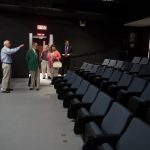 The Chester Hawrylciw Theater was on the tour 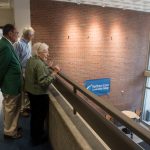 A view from the second floor 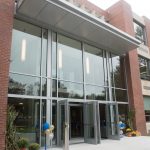 The new foyer on the front of the renovated Spurk Building