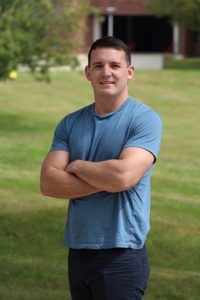 When members of the Greater Lawrence Kiwanis Club Foundation established a scholarship to honor the late, Anthony “Tony” Sakowich of Andover, Scott Bowman, a student at Northern Essex Community College, was just the type of student they had in mind.

Bowman is the recipient of the $1,000 Sakowich Scholarship which was awarded for the first time this year.

Strong-willed and determined, Bowman has come to understand the value of education and will not be deterred even if it means traveling to the NECC campus via train, automobile, bus, or a ridesharing service.

Also an Andover resident, Bowman, 24, was a moderate student when he graduated from Andover High School in 2011 and certain that he wasn’t college material. One of four children, in his young life, Bowman witnessed bad behaviors from heroin addiction to alcohol abuse. He managed to avoid both and side-step trouble. Bowman is now preparing for a career in finance.

Bowman expects to graduate with an associate degree in business transfer from Northern Essex in May and will continue to study for a bachelor’s at UMass Lowell. He is one of nearly 200 Northern Essex students to share close to $200,000 in scholarship money raised by NECC’s office of institutional advancement. 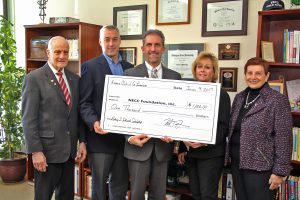 The Sakowich Scholarship, which Bowman was the recipient of, was established for inventor, pilot, and philanthropist Tony Sakowich who died on Valentine’s Day 2014. A World War II veteran and alumnus of Tulane and Bentley universities, he was a self-made man. A successful entrepreneur and inventor, who patented a process to mold laminated countertops that were manufactured in North Andover, he and his wife Gladys were generous benefactors to many causes and organizations.

Bowman was nominated for the scholarship by Sharon McDermot, director of academic affairs operations, who was his instructor for two business courses. She wrote, “Scott is a diligent student with a bright future…It was a pleasure to have Scott as a student in class and I am sure that he will continue to succeed in reaching his personal, academic, and professional goals.”

In accepting the scholarship Bowman wrote, “Anthony and his wife Gladys were business pioneers who each enjoyed finance and investments, they were fiercely generous, outspoken and strong, devoted to children and passionate about education. I am extremely proud and honored to have been selected for this scholarship because I too am passionate about finance and investments…this generous scholarship will grant me the financial assistance that I need to be able to fulfill my dream and continue to strive for greatness in my life.”

No stranger to hard work, Bowman has worked landscaping and laying hardwood floors. He currently works full time for an electroplating company. In the fall of 2012 he enrolled in his first class. He has been taking two or three night courses each semester since. Without complaint, he travels to the Haverhill and Lawrence campuses using public transportation and Northern Essex’s shuttle bus.

He said the scholarship will free up funds for him to spend on transportation to and from NECC.

A former wrestler, football player, and snow boarder, Bowman thought he might pursue a career in sports management. He took advantage of Northern Essex’s internship program which helped him realize his interests followed finance instead.

Other Andover residents who were awarded scholarships include: