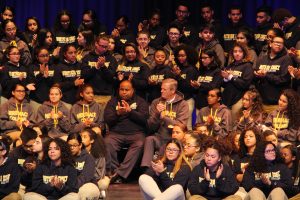 With all of the excitement of a pep rally and the fanfare of a Broadway play, students from Lawrence Public Schools welcomed Massachusetts Governor Charlie Baker and other top state education and local officials to the Lawrence High School Performing Arts Center to celebrate a $ 2 million Smith Family Foundation grant that is funding Early College partnerships with Northern Essex Community College and Merrimack College.

After remarks by state and school dignitaries and performances by Lawrence High School (LHS) students including music selections from “Aida”, Lawrence mayor Dan Rivera and Baker took to the stage.

Rivera asked the students, who represented grammar school through high school, if they had parents from a different country or spoke a language other than English. After a resounding yes, he said he did too. He listed the Lawrence schools he attended and noted he graduated from Lawrence High School.

“You know what else I did? I went to college,” he said. “You can go to college too. I wasn’t born the Mayor.” 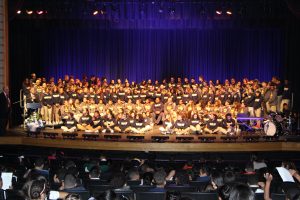 Rivera and Baker were presented with sweatshirts from each of the colleges.

“How do you think these sweatshirts will look on these students?” Rivera asked Baker.

Baker agreed that each of the students in the audience would wear them well.

He suggested the students “take seriously” what the Mayor said. Early College programs, he said, “Give every kid in high school the opportunity to do something great.”

Baker pointed out that the students could live at home while attending a school they are familiar with and earn college credit.

“Early College gives you all a chance to be whatever you want to be…a singer, a drummer, an actor, a mayor…I’m walking, talking proof anyone can grow up and be Governor,” Baker said. 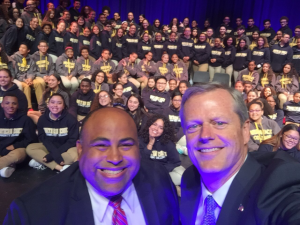 Baker and Rivera in a selfie with Early College students.

And with that, to thunderous applause, the stage curtains were drawn open to reveal nearly 200 LHS students filling the stage, each wearing the sweatshirt of the college at which they are enrolled.

The grant allows up to 200 Lawrence High School students to enroll in Early College. This year, 120 enrolled at Northern Essex while another 64 take classes at Merrimack College. Students have the opportunity to earn up to 24 credits at NECC or 12 credits at Merrimack College as well as the opportunity to participate in internships and work-based learning activities.

The project is aligned with the Commonwealth’s recently announced Massachusetts Early College Initiative, which aims to give thousands of Massachusetts students, especially first-generation college-goers, access to college completion and career success. 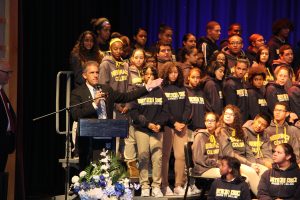 Jasmine Pimental, an LHS senior, who is enrolled at NECC, told her fellow classmates that she wasn’t much of a student when she started Lawrence High, but started taking her education seriously her sophomore year and eventually enrolled in Early College.

“College work is harder…you learn to manage your time…you are expected to do what you need to do, before it’s due,” she said.

She encouraged the students to “push yourselves”.

James Berylson of the Smith Family Foundation said he and his grandfather were “excited” to be in attendance.

“We are a foundation that cares very deeply about public education.”