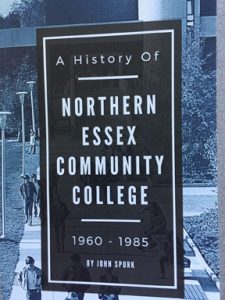 Copies of “A History of Northern Essex Community College” are available in the Bentley Library.

There are a limited number of copies of the recently published book, “A History of Northern Essex Community College, 1960-1985,” by Dr. John Spurk, the late NECC history professor for whom the Spurk Building is named, available to the public.

The book is free and available at the front desk of the Harold Bentley Library on the Haverhill campus, 100 Elliott St.

This manuscript was written by Spurk in the late 1980’s, and edited by his former student Robert Eddy in the early 1990’s after Spurk died in 1991. Anyone who would like a free copy may stop by the Harold Bentley Library on the Haverhill campus and ask for a copy at the main service desk.

Spurk was a professor of history & government at Northern Essex for 24 years until his retirement in 1991. He was a respected and well-loved member of the college community who played a key role in the development of the college. Each year the Dr. John Spurk Memorial Scholarship is presented to a Liberal Arts major who resides in the Merrimack Valley region and is involved in Community Leadership/Service.

Retired NECC President John Dimitry, who as the second president of Northern Essex served from 1975 to 1996, asked Spurk to write the history in 1986. Spurk completed it in the late 1980s and it has been part of the college’s archives since then. Mike Hearn, the college’s director of libraries, can be credited with providing the leadership to get the history published, along with an update covering 1986 to the present written by Mary Wilson, dean emeritus of the college, with contributions from Wendy Shaffer, dean of development.

There are about 100 books available.