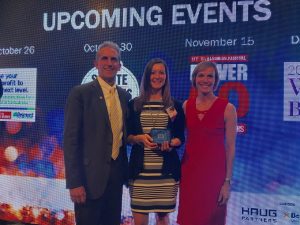 Ashley Moore of Haverhill, director of academic, career & civic engagement at Northern Essex Community College, has been selected as one of the Boston Business Journal’s (BBJ) 40 under 40.

She was nominated for the honor by Northern Essex President Lane Glenn, who wrote “In just four short years, Ashley Moore has rebuilt Northern Essex Community College’s Career Services, creating a pipeline between our students and area employers with workforce needs.”

BBJ received nearly 350 nominations for the award which recognizes “the best and brightest in Massachusetts.”  Moore and the other awardees from for-profit, nonprofit and government were honored at an October 19 ceremony at the YMCA of Greater Boston.

Moore, 31, was hired by the college in 2013 as career connections coordinator after serving as a graduate fellow at Northern Essex while working on her master’s in higher education at Merrimack College.

One of her first accomplishments, working closely with faculty and area employers, was building an internship program, focusing on four academic areas: business, journalism/communications, art, and computer information sciences.  Students are now placed in internships with more than 65 employers and the numbers keep growing.

Moore also created a career center that opened on the college’s Haverhill this fall and has plans to open a career center in Lawrence in the near future; revitalized on campus recruitment, creating On-Campus Employer Recruitment Weeks, which bring over 40 employers to campus each semester; implemented NECCLink, a career service management platform, which enables the business community to post jobs and internships for Northern Essex students; and started an annual Networking Night which, now in its third year, attracts close to 200 students and employers.

“It is such an honor to be nominated and selected for this award,” said Ashley. “I truly love what I do at NECC because it allows me to make a positive impact on the community each day. I am excited to continue to build upon what we have started here at the college.”

When she started, she was a one-woman show, working with a small budget and a great deal of sweat equity. Since then, she’s hired a full-time internship program/career services coordinator and works with a part-time career coach for our Lawrence campus.  She’s also hired interns to help with branding and program development.

Moore earned a degree in Corporate Finance and Accounting and a Master’s in Taxation from Bentley University, and, after working as an accountant, decided to pursue a career in education, enrolling in Merrimack College’s Master’s in Higher Education.  She says her own career change has made her well-prepared to help others with their career journeys.

To learn more about Career Services at NECC, visit the website or contact Moore at amoore@necc.mass.edu or 978 556-3946.