Haverhill Man Trades One Science Program for Another 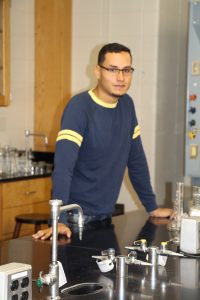 David Mesta stands in an NECC lab. He is a graduate of the NECC Laboratory Science Program.

With strong interests in science and math, David Mesta considered engineering as his career path, but a certain Northern Essex Community College chemistry class and time spent with sea gulls convinced him otherwise and laboratory science became his future.

The 20 year-old Haverhill resident graduated with an Associate of Science degree in Laboratory Science in May, is continuing to take biology classes, and is preparing to transfer to a four-year, bio-chemistry program with the hopes of working as an industrial chemist one day. He works full time in quality assurance at Andover Healthcare, a Salisbury manufacturer of cohesive bandages and tapes for the healthcare, animal health, and sports medicine industries.

In addition, Mesta just completed his second successful summer participating in The Gulls of Appledore Project, banding gulls on Appledore Island in Maine. Gull banding provided a valuable opportunity for him to experience field work versus laboratory work, Mesta said. Under the guidance of NECC science professor Sarah Courchesne, he spent two weeks in the summer of 2016 and 10 weeks this past summer monitoring, banding, and measuring Great Black-Backed and Herring Gulls. He also made quite an impression on Courchesne with his inquisitive nature and strong work ethic. 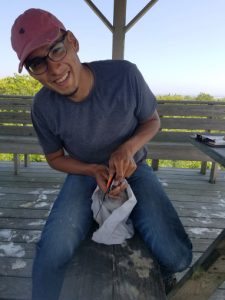 “…it was abundantly clear to me that David had what it took to spend a summer on the island doing field research,” Courchesne said. “David is a keen observer, quietly taking everything in. Countless times, I would realize I needed a particular tool and look up to find David silently handing it to me, like a practiced surgeon’s assistant.”

His time spent on Appledore served both him and the project well, she said.

“Since his interests lie in the microbiology field, and his summer project on Appledore was focused on ‘blood parasitism’ in Great Black-Backed Gull chicks, we were able to make blood smears on hundreds of fledglings during chick banding week and spent our evenings hunched over microscopes scanning for the telltale signs of invaders infecting the gulls’ red blood cells. We can’t wait to see where David goes from here.”

Chasing gulls around an island on the Atlantic coast, wasn’t remotely on Mesta’s horizons when he was being homeschooled, his sights set on engineering. But, while enrolled in Mike Cross’s wildly popular chemistry class, he viewed a video on the laboratory science program and proceeded to change his major.

His new major required an internship, so the time spent on Appledore was time well spent.

“I really had the chance to see things and do field work like monitoring the gull nests, measuring and banding the eggs, and labeling the chicks, that I would never have seen in the lab,” he said.

Northern Essex offers an Associate in Applied Science degree in Laboratory Science. It prepares individuals for jobs as lab technicians or for transfer into a four-year degree program. Students in this program gain a strong theoretical background in chemistry and the associated sciences, learn technical lab skills and instrumental analysis, and acquire critical thinking and trouble-shooting skills. Graduates can work in entry-level positions in drug companies, cellular technology companies, medical labs, manufacturing companies, small environmental testing companies, the EPA, DEP, and other wildlife or state agencies.

For additional information on the laboratory program contact Marguerite White-Jenneau at 978-556-3345 or mwhitejenneau@necc.mass.edu, or contact Enrollment Services at 978-556-3700.