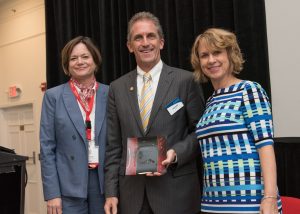 Pacesetter of the Year recognizes a community college president who has demonstrated an outstanding commitment to marketing and communications and strong personal leadership for college outreach endeavors.

According to the NCMPR District 1 program, Glenn is a thought leader who actively advocates for Northern Essex and the community college mission on twitter (@neccprez) and Facebook, in his blog titled “Running the Campus”; and in the op-ed columns which he writes for local and regional media outlets.

Since being named president, he has focused on building strategic partnerships, designed to forward the college’s mission and expand its reach in the community with area employers, four-year colleges and universities, K-12 school systems, and government leaders. 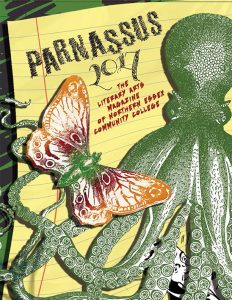 The 2017 issue of Parnassus, the college’s literary arts magazine, features artwork, photography, short stories, and poetry by Northern Essex students, faculty, and staff.  This year’s design was inspired by the work of Lynda Barry, an American cartoonist, who is known for her “sketch journals”.

The NCMPR Medallion Awards recognize outstanding achievement in design and communication at community and technical colleges. It is the only regional competition of its kind that honors excellence exclusively among marketing and PR professionals at two-year colleges.

NCMPR, an affiliate of the American Association of Community Colleges, is the leading professional development organization exclusively serving two year college communicators, with more than 1,600 members across the country.