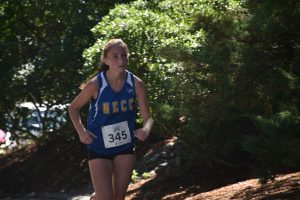 This past weekend at the Junior College Northeast Invitational hosted by the Community College of Rhode Island both Santa-Waldron and Mullins finished among the top 8 individuals in their respective races. Santa-Waldron completed the hilly 8,000 meter men’s race in 8th place with a time of 30:36. On the women’s side, Mullins finished 4th with a time of 22:10 over the 5,000 meter course. 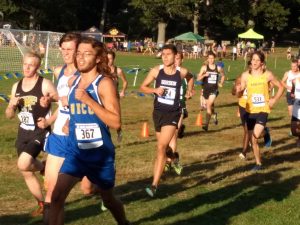 “Santa – Waldron and Mullins both have been competitive and consistent in their races throughout the season. They have been consistent in their weekly training and have worked hard to get to this point. It is a first time experience for both of them. I know they will both hold their own on the national level. They know what they need to do to have a good race mentally and physically” said head coach Suzanne Dunn.

The National Championship races will be held at Stanley Park in Westfield, MA and hosted by Holyoke Community College on Saturday November 4th. The Stanley Park course is familiar to both of the Knights runners as they competed there earlier in the season on October 7th at the James Early Invitational. On the Stanley Park course Santa-Waldron posted a time of 29:26, while Mullins completed the women’s race in a time of 21:45. Both times run at Stanley Park earlier in the season are just off of season personal bests both runners clocked this season at the UMass-Dartmouth Invitational.