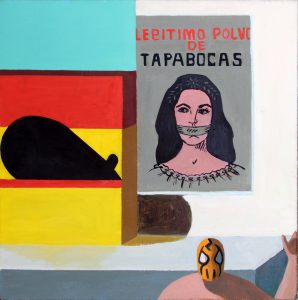 Caribbean-born artist Stacy Mohammed of Randolph will display a number of her oil paintings in an exhibit titled “Santos y Milagros” at Northern Essex Community College’s Linda Hummel-Shea ArtSpace from November 13 through December 15. There will be an opening reception and artist’s talk Thursday, November 16, from 3:30 to 5:30 p.m.

These paintings explore Catholicism, the religion in which Mohammed was raised, and the role of the saints as well as the question of identity and culture.

“Being from the Caribbean and of mixed ethnicity and religions, I am interested in the question of identity and these paintings are an attempt to explore all these parts of myself, my culture and other cultures like mine, places like Mexico, Dominican Republic, where the native culture has had to adapt and reinvent itself,” Mohammed said. 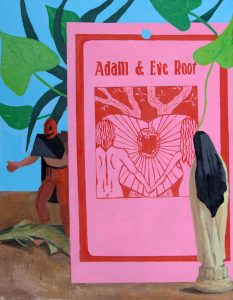 The ArtSpace is located in the Harold Bentley Library on the Haverhill campus, 100 Elliott St.

She attended the Skowhegan School of Painting and Sculpture, Skowhegan in Maine, earned an M.F.A. from Boston University; attended the New York Studio School and earned her bachelor of arts from Brooklyn College, C.U.N.Y., Brooklyn, New York.

Her work has been exhibited in numerous galleries including Dadian Gallery, Washington, D.C.; and Sherman Gallery and Fenway Studios in Boston. She has received numerous awards and fellowships. Most recently she was artist-in-residence at the Henry Luce III Center for Arts & Religion, Washington, DC.

NECC offers an associate degree in general studies: art with a focus on specific area of the arts, such as fine arts, multimedia, photography or visual communications.

For further information contact Patricia Kidney at pkidney@necc.mass.edu or Marc Mannheimer at mmannheimer@necc.mass.edu.