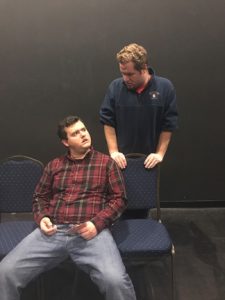 What do you call two divorced men – one a compulsive neat freak and one a compulsive slob – who live together? Playwright Neil Simon called them “The Odd Couple” and Northern Essex Community College’s Top Notch Players will present its own adaptation of the classic comedy beginning Wednesday, November 29, at 7 p.m.

Felix Ungar, portrayed by NECC student Ben Beverage of Lawrence, and Oscar Madison, played by Northern Essex’s Mike Gulezian of Salem, New Hampshire, will come to life on the stage of the newly renovated Chester W. Hawrylciw Theater on the third floor of the Spurk Building on the Haverhill campus, 100 Elliott St. The play is directed by NECC theater professor Brianne Beatrice.

The play opens in Oscar Madison’s slovenly apartment as a group of his friends are deep into a game of poker. The last of the group, Felix Ungar, arrives late and depressed: he and his wife have recently separated. HIs friends fear for his mental state. Oscar invites him to move in with him until he has a chance to figure things out.

At first, Felix’s love of order is the perfect answer to Oscar’s messy house, careless spending, and gambling problems. But soon his fussiness and hypochondriac ways prove extremely annoying to those around him, especially Oscar, who has to decide whether to let his friend stay and drive him crazy or throw him out to retain his sanity. Hilarity ensues as these two very polar-opposite friends have to figure out how to reconcile their differences.

Tickets are $12 for general admission and $10 for students and seniors.