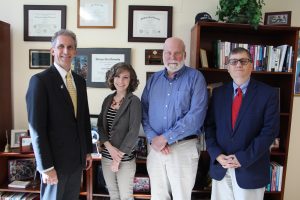 Tracy Fitzgerald, NECC’s payroll director, in nominating Amaru, noted how, after working on a recent project with him, she realized just how invaluable he is to the college. She wrote in her nomination, “After meeting with other colleges I realized just how much time Chris has saved the payroll office every pay period. Other colleges take days to pull together reports and spreadsheets that I can get in a matter of minutes.”

A 24-year employee of NECC, Kolotila is a senior system analyst and adjunct faculty member. He was nominated by co-worker Cherie Hagen who wrote in her nomination, “Michael is often in the front lines, setting the example in teamwork, cooperation, brilliance in his knowledge and abilities, as well as humility and humor. He consistently lets others know he can and will help, before ever being asked… (Michael) has been “a major player and key advisor in the advancements and successes of the college…his standards remain high at all times.”

Comiskey, a four-year employee of Northern Essex, is an administrative assistant in the institutional advancement office. She received eight nominations.

In her nomination Jean Poth, vice president of institutional advancement wrote, “Sarah has consistently high work standards. Sarah is a perfectionist in her work and regularly meets or exceeds all of her goals…she has consistently high on the job performance. Her writing and editing skills working with the marketing department have in particular, received praise from a variety of college leaders…Sarah also takes an innovative approach to tasks. She always strives to find ways to do things smarter, faster, and easier…Sarah has excellent problem solving techniques. She regularly works with our students during alumni phonathons and has to train, answer questions and address problems on the spot. Sarah has a service oriented approach to her job. She helps out whenever and wherever it is needed. Sarah is warm, friendly, cooperative, courteous, and professional in her manner.”

She earned a Bachelor of Arts in Writing from Ithaca College and a Master of Arts in Publishing from Emerson College.