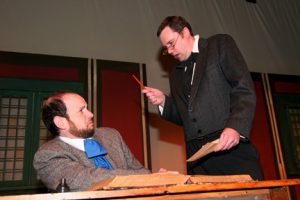 After a two-year hiatus, Northern Essex Community College will once again present the Charles Dickens classic “A Christmas Carol” in the newly renovated Chester Hawrylciw Theater.

Ebenezer Scrooge, the Cratchit Family, and all the other Dickensian characters will come to life on a refurbished stage on the third floor of the Spurk Building on the Haverhill campus, 100 Elliot St.

“We are excited to be bringing this show back,” said Alisa Bucchiere, NECC music professor and one of the four Madrigal singers in the play. The Merrimac resident prompted the resurrection of the play.

There was a bit of nostalgia between Bucchiere and NECC Early Childhood Professor Deirdre Budzyna and her husband John and children Erin, Maggie, and Colin, all of who have played different characters over the 15 years it was performed.

This year, John and Deirdre Budzyna of Newburyport, are directing the play and Bucchiere is musical director. Alumnus Mark Morrison of Haverhill will play Scrooge a role he brought to life back in 2012.

“We have done this show many, many times,” she said. “Truth be told I kept nudging them until the Budzyna clan said yes,” she said. “It will be a bit of a celebration too, to be in the new theater space because it is so different than it used to be, and with a nod to the future so that NECC’s “A Christmas Carol” production can help fund future theater productions and enable the current theater students to continue to go to the Kennedy Center American College Theater Festival each year.”

Tickets will be available at the door. They can also be purchased through MKTIX.org at

The NECC production was originally presented as a onetime fundraiser for the performing arts department by now retired husband and wife NECC Professors Jim Murphy and Susan Sanders. The play was so successful, it became an NECC community event each holiday season with faculty, staff, students, and their family members auditioning for roles.

Included in the cast are: