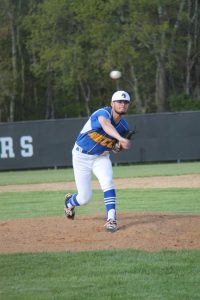 Damian Gibson will return to the pitcher’s mound when the NECC Knights opens its season in March 2018.

Northern Essex Community College’s baseball team, the six-time reigning Region XXI Champions, has announced its 2018 schedule. After missing out a year ago, the Knights will also be seeking a sixth trip to the NJCAA World Series where they have been five times since 2010.

“Coming off a very busy and successful fall season I am very excited for the 2018 season and team.  We return several key starters and this year’s incoming class could be one of our best,” stated sixth year head coach Jeff Mejia

The season is set to open in Florida on Saturday, March 10, at the Russ Matt Invitational, where the Knights will play 12 games in the Orlando area. The Florida trip will also include two games against the junior varsity team of NCAA Division II Rollins College.

The home opener is scheduled for Thursday, April 5, against Holyoke Community College.

The complete 37-game regular season schedule also includes a date against NCAA Division III opponent Tufts University on April 3. Additional games may be added to the schedule prior to the start of the season. (Updates will be posted to the online schedule)

The double-elimination Region XXI tournament is set to be played May 11-13 with the winner advancing to and hosting the District Championship the following weekend May 18-20. The winner of the district championship would advance to the World Series to be played in Greenville, TN.