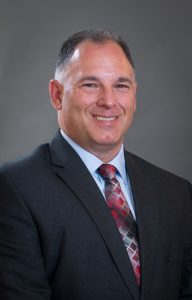 Michael Hearn, director of library services at Northern Essex Community College in Lawrence and Haverhill, was elected new board president of the Lawrence History Center at its October meeting.

The LHC was founded in 1978 as the Immigrant City Archives by German immigrant Eartha Dengler. Its mission is to collect, preserve, share, and interpret the history and heritage of Lawrence and its people.

Hearn’s affiliation with the organization began back in 2002 when he wrote the finding aid for the LHC’S largest individual collection, the Records of the Essex Company. The “finding aid” is a document containing detailed information about a specific collection of papers or records within an archive. In this case, the Essex Company. Hearn went on to write the book, “The History of the Essex Company,” which was published in 2014. A year later, he joined the LHC board moving quickly into the role of second vice president in 2016. He replaces Pamela Yameen, who served as president for 12 years.

“I look forward to my new role as the board president of the Lawrence History Center and continuing the efforts of Pamela Yameen to further strengthen and grow the organization,” Hearn says. “Pamela Yameen has guided the Lawrence History Center through many changes and developments, and can rightfully take significant credit for the position the LHC currently finds itself in. Through her steady advice and oversight, the LHC has grown into a stronger and more impactful organization. It has become a cultural fixture for the Lawrence community, and is positioned to expand its impact going forward. The Greater Lawrence area is indebted to her dedication and commitment.”

Hearn, a resident of Nashua, NH, became director of NECC’s library services in 2014. He worked at NECC’s Lawrence campus for nine years prior to that.