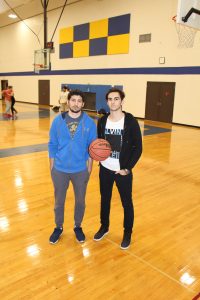 Emir Alagoz and Guney Kilitcioglu of Turkey are members of NECC’s growing international student body and play for the Knights basketball team.

After playing basketball for Northern Essex Community College playing for a professional basketball in Turkey should be a slam dunk for Guney Kilitcioglu and Emir Alagoz.

The two Turkish natives, who have studied English since the first grade, are in their first semester at Northern Essex. Both are members of the 10-man Knights basketball team under the tutelage of longtime NECC basketball coach Joe Tardif.

“It is a pleasure to have both Guney and Emir on the basketball team this year. They both bring a work ethic to the classroom and the basketball court that many of the American players do not have,” Said Tardiff. “They are a great addition to the team.”

The young men are among the more than two dozen international students enrolled at NECC.

“Guney and Emir have integrated very well on campus, both in the classroom and with their teammates, ” said Daniel Blair, NECC’s director of NECC’s athletics. “Regardless of the sport, international students bring a unique style of play and have always brought an added sense of maturity to their teams on the court.”

Kilitcioglu, 18, arrived in the states just this past summer to play Amateur Athletic Union (AAU) Basketball in California. Alagoz, 19, has been here for two years having attended The Phelps School in Pennsylvania and Victory Rock Prep in Florida. He also attended the California AAU program this past summer.

The two aspiring professional basketball players shared an academic advisor. They became accidental roommates when it was recommended they both attend NECC and play basketball. American college basketball is unlike college basketball in Turkey, they explain. In Europe college teams are not supported by the schools. The club teams are instead where the competition lies. Time spent on an American college or university’s parquet, they said, is certain to give them credibility in the EuroLeague where, they noted, Turkey currently has the best team in the league. It is their goal to be playing in that league within the next few years.

Kilitcioglu, a business transfer major, and Alagoz, a psychology major, intend to transfer to a four-year college or university to pursue their bachelor degrees and continue shooting hoops.

They credit Tardif with being helpful and patient with them. It has taken some time for them to learn the American approach to basketball.

“In Europe it is more of a team sport,” said Kilitcioglu. “And it is much more physical playing defense…you can’t touch here or you get fouled.”

Haverhill’s suburban setting has taken some getting used to, they said. With no car and no license, they rely on public transportation to travel from their downtown Haverhill apartment. Both were raised in Istanbul, the most populated city in Turkey, so Haverhill and its environs seems a little sleepy. The lack of local flavorful Turkish fare has been challenging. They are eager to return to Turkey during the semester break.

For more information on the basketball team or other NECC sports, contact Daniel Blair, director of NECC’s athletics at dblair@necc.mass.edu