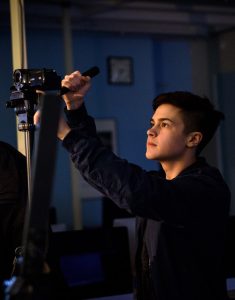 France has Cannes, Park City has Sundance and now Northern Essex Community College has one…a film festival that is.

The first ever NECC Finale Film Festival, showcasing the final projects of the 16 students enrolled in Jeffrey Palmer’s Video & Digital Filmmaking class, will be held Monday, Dec.18, from 7 to 9 p.m. in the recently renovated Lecture Hall A in the Spurk Building on the Haverhill campus 100 Elliott St.

This is Palmer’s first semester teaching at NECC. Although, the independent filmmaker and writer has a resume that includes teaching at the middle and high school level.

“Some students didn’t know what to expect out of this video class,” he admits. “I really wanted them to push the boundaries. I wanted them to tell the stories they wanted to tell. As we near the end of our semester together, I think they surprised themselves and managed to find inspiration where they weren’t looking for it.” 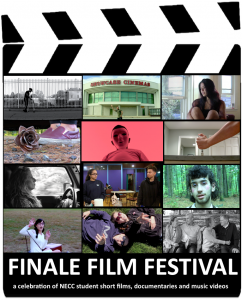 Some 25 student-created films will be screened during NECC’s first Finale Film Festival.

The Somerville resident said approximately 25 films, varying in running times from two to eight minutes, will be screened at the Finale Film Festival. Some students completed more than one film or were involved in a group film project. There will be a wide range of genres covered including drama, psychological thriller, horror, comedy, mockumentary, romance, non-fiction, music videos, visual poems, and personal essays. Some films contain mature subject matter, but all content would fall well under a PG-13 rating, according to Palmer.

“Subject matter includes teen pregnancy, the loss of a parent, a horror/comedy about killer, ghost, mosquitoes from hell…it’s a really good mix,” Palmer said. “I’m really impressed with the students.”

The students are excited and enthusiastic about their filmmaking experiences.

“With film you can hear it, see it, and experience the story,” said Kieran Smith of Topsfield.

And they learned quickly and collectively that making a film is a group project. 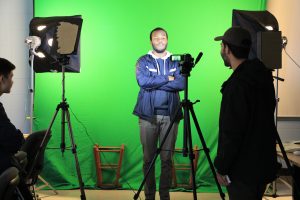 “My favorite moment was when we were all working together as a single unit to record just a simple diner scene,” said Wilfred Acosta of Methuen. “We started off pretty rough, but as we keep going we got used to each other and we made it work.”

Joshua Jacobo of Lawrence agreed saying “It takes a lot of peoples’ time and effort to make a film no matter how long. Filmmaking is definitely a process.”

Palmer added, “They learned that filmmaking is a very social activity and that you need to collaborate with others. It was a challenge at times in terms of scheduling friends, locations, and weather. It wasn’t easy, but they all managed to rally and create really cool films.”

By January 2018, the films will be available, in some capacity, online, Palmer said. The channel and platform have yet to be decided. 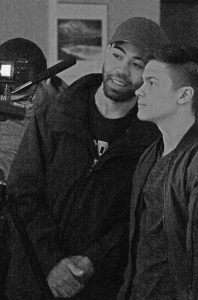 Jancarlos Infante (left) of Lawrence and Hanson Gobron (right) of Salem, NH, collaborate on a shot during a recent film shoot.

The students have put a tremendous amount of time into their films and those results should be shared Palmer said, “I’ve encouraged the students to submit their films to other festivals and events outside of the school…these are first-time filmmakers and it’s important to acknowledge that all of the films were produced on zero or shoestring budgets outside of our class time together. Each student had access to a high-definition video camera, tripod, audio gear and editing software. What they produced with this equipment was up to them, with my guidance and input along the way.”

By the end of the course and the semester, it changes the way the students think.

“When I watch movies now I pay attention to all the little things like when it cuts, where it cuts, how long each scene is, and what sounds you can hear,” says Declan Burke of North Andover.

“This is a nice way for the students to get their work out there. Art can be a solitary endeavor,” Palmer said. “This is great way for people to see what the students have been working on and get a dialogue going.”

For additional information on the Finale Film Festival contact Palmer at jpalmer@necc.mass.edu