NECC is Still Best for Vets 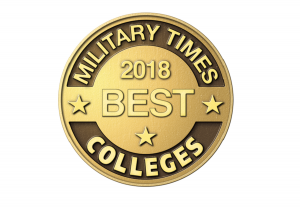 Northern Essex Community College takes good care of its military veterans and its showing. For the third consecutive year NECC was selected for the Military Times Best: Colleges 2018 rankings (formerly Best for Vets).

This is an annual ranking of the best colleges for veteran, active-duty, and military dependent students. More than 600 schools submitted an exhaustive 150-question survey to be considered for the honor.

Of its nearly 6,000 students, NECC identifies 124 students as military. Northern Essex has a dedicated space for Veterans Services under the auspices of Sean Goldman, a former U.S. Marine who is now director of veterans services as well as a mental health clinician in NECC’s counseling and psychological services.

The rankings were more competitive than ever according to the “Military Times”. A record number of school participated in the survey and less than half received the designation.

“… Only the best made the cut,” said George Altman, the “Military Times” editor in charge of the rankings. “For the past eight years, we’ve seen colleges and universities consistently increasing their resources, revising their policies and improving their academic outcomes for military and veteran students. The Military Times Best: Colleges rankings showcase the very best of these efforts.”

The  “Military Times” survey asks colleges and universities to meticulously document a tremendous array of services, special rules, accommodations and financial incentives offered to students with military ties; and to describe many aspects of veteran culture on a campus. These institutions were evaluated in several categories, with university culture and academic outcomes bearing the most weight.

As with all Military Times: Best Colleges 2018, it is an editorially independent news project that evaluates the many factors that help make colleges and universities a good fit for service members, military veterans, and their families.

The rankings were published at  MilitaryTimes.com,  ArmyTimes.com, NavyTimes.com, AirForceTimes.com and MarineCorpsTimes.com and appeared in full in a special magazine issue of “Military Times” on newsstands in mid-November. The release of this year’s list also marks Military Times’ inaugural declaration of the month of November as Veterans Month. The independently owned media company is celebrating veterans beyond Veterans Day, with 30 days of veteran-focused coverage.