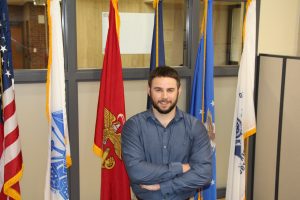 When student veterans walk into the Northern Essex Community College Veterans Services office they will find someone who talks their talk and has shared experiences.

Sean Goldman, 32, of Derry, NH, is a former U.S. Marine who served in Iraq, Belgium, Tanzania, and China. He splits his time between serving as director of the Veterans Services office and as a mental health clinician to the general student population in Student Life.

The son of a career U.S. Marine, Goldman grew up attending schools in five states along the Eastern Seaboard. After graduating from high school in Florida, he briefly attended college before deciding to enlist in the Marines where he worked as an electronic maintenance technician. He served for eight years, working his way up to the rank of sergeant. During that time he earned his under graduate degree through “distance learning” from St. Leo University in Florida.

After leaving the Marines, Goldman earned his master’s in clinical social work from Boston University deciding to specialize in veterans’ issues. His decision was based on a ‘culmination of factors” he said. As a mentor to junior marines, he said, he saw enough undiagnosed mental health issues that he became interested in working with that population.

Internships at the Chelsea’s Soldiers Home and the Bedford VA Hospital, he said, “bolstered his resolve to work with veterans”.

Goldman said there are approximately 124 veterans actively enrolled at Northern Essex. He assists them with paperwork to keep them on track to receive their veterans’ benefits and serves as a general liaison. He also works with prospective student veterans to connect to VA resources. He will begin leading a spinoff veterans’ orientation during the traditional orientation sessions.

“We have to develop additional outreach ideas and develop ways to better integrate and involve student vets,” he said.

Goldman says he enjoys balancing his two roles to NECC. One allows him to pursue his interest in mental health while the other gives him direct interaction with the veterans.

Northern Essex now has a webpage dedicated to Veteran and Military.