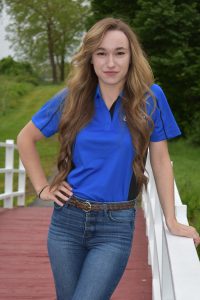 A Northern Essex Community College liberal arts student was one of just eight Massachusetts community college students and one of 534 nationwide to be named a semi-finalist for the Jack Kent Cooke Under Graduate Transfer Scholarship, which awards selected finalists as much as $40,000 per year for up to three years to complete their bachelor degrees.

The finalists will be selected in April based on their academic performance, leadership, perseverance, and service to others.

The 22-year-old Amesbury resident was selected as a semi-finalist from a pool of nearly 2,500. Despite chronic health issues she maintains a near perfect GPA. She left high school at 16 after being felled by an undiagnosed case of Lyme Disease. Once she began treatment, she completed a homeschooling program and earned her GED in 2015.

After enrolling at Northern Essex She became a Commonwealth Honors student and immersed herself in NECC life. An orientation leader, she has served as president of the Students for a Democratic Society Club, is a member of the Student Leadership Institute and the Amnesty International Club, a staffer and contributor  to “Parnassus” NECC’s arts and literary magazine, and former president of the Student Government Association. She also participates in the Pathways for Academic and Career Excellence (PACE) Program, which serves first generation college students and students with financial need. PACE is a federally funded TRiO, Student Support Services program.

Cooke Scholarships fund the costs of attending college not covered by other financial aid, plus intensive academic advising, stipends for internships, study abroad opportunities, and the ability to network with other Cooke Scholars and alumni. After earning a bachelor’s degree, these Cooke Scholars will also be eligible to apply for a scholarship for graduate school worth up to a total of $75,000.

Jack Kent Cooke, who died in 1997, built empires in newspapers, cable television, and sports. He owned the Los Angeles Lakers, the Washington Redskins, and the Chrysler Building. His worth was estimated at $825 million. He collected art, vintage automobiles, race horses, and sherry. All but $39 million went to establish the Jack Kent Cook Foundation “to serve exceptional and disadvantaged young people.”

The Jack Kent Cooke Foundation is a private, independent foundation dedicated to advancing the education of exceptionally promising students who have financial need. The Foundation supports exceptional students from elementary school to graduate school through scholarships, grants, direct service, and knowledge creation and dissemination.