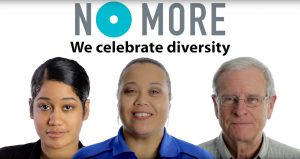 A series of three videos—featuring Northern Essex Community College students, faculty, and staff—has been created to help foster awareness of sexual harassment and inform members of the college community of their rights under Title IX, which prohibits discrimination based on sex at federally funded educational institutions.

The powerful 90-second videos tie-in with two national campaigns, “No More” and “It’s On Us”, and were created in-house.  One video features faculty and staff, a second features students, and a third is in Spanish.

“With the shift in the climate of the nation in regards to sexual harassment, we thought it was time to remind everyone of how important it is to foster awareness, practice inclusivity, and serve as advocates for survivors,” said Caron.  “We want to be sure all of our students, faculty, and staff feel safe and supported.”

The videos were produced by Lauren Erwin, the college’s video producer, with assistance from Lance Hidy, accessible media specialist.

The videos are just part of the college’s efforts to increase awareness of sexual harassment.  Northern Essex’s policy on affirmative action, equal opportunity, and diversity is posted on the website and available in printed form in the Human Resource Office.  This policy provides definitions, including detailed explanations of different types of sexual harassment and violence; outlines the process for reporting and processing a complaint and conducting an investigation; and also includes a complaint form.

The college is also collaborating with the YWCA Northeastern Massachusetts to offer a series of workshops focusing on issues such as stalking awareness, dating violence, and sexual assault for faculty, staff, and students.