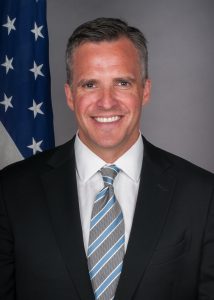 Rufus Gifford, former U.S. ambassador to Denmark under President Obama, will speak to the class on Wednesday, February 14, at 9:30 a.m. in the Spurk Building Room 113 and George Bruno, former U.S. ambassador to Belize under President Clinton will visit on Monday, February 26, at 12:30 p.m. in Spurk 106. The Spurk Building is located on the Haverhill campus, 100 Elliott St.

These events are free and open to the public. For more information, contact Padova at 978-556-3297 or rpadova@necc.mass.edu.

Gifford received his bachelor of arts from Brown University. He spent some time in Hollywood working on family movies before moving on to politics, where he has served in various financial management capacities for Democratic candidates. In 2012, he was the finance director for President Obama’s re-election campaign. From 2013 to 2017, he served as U.S. Ambassador to Denmark in the Obama administration. 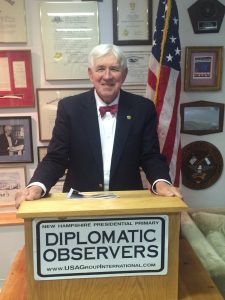 Bruno is a graduate of Hartwick College and received his Juris Doctorate from George Washington University. He served as a volunteer aide for Senator Robert Kennedy and was also a fellow at the University of Pennsylvania Law School. He has worked as a civil rights lawyer and at age 29 argued and won before the U.S. Supreme Court.

He has also worked as a prosecutor in the U.S. Justice Department, served as an adjunct professor of international relations in the graduate school of public policy at New England College, served as a senior member of the U.S. team that facilitated the transfer of control of the Panama Canal from the U.S. to Panama and as a senior advisor in the U.S. Army’s international office at the Pentagon, and has traveled to over 55 countries as a diplomat and lecturer.

From 1994 to 1998, he served as U.S. Ambassador to Belize in the Clinton administration.  He currently practices global immigration law at LawServe in Manchester, NH, and is a principal in the consulting firm USA Group International.