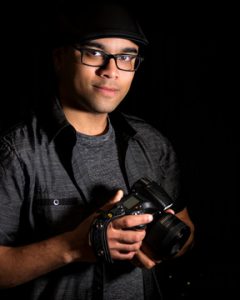 Jose Garcia, is photographing members of the Northern Essex community in a new initiative #FacesofNECC.

Jose Garcia likes to tell other people’s stories…with his camera.

To that end, the former Northern Essex Community College Information Technology student roams the Haverhill and Lawrence campuses, camera in hand, capturing the images and tales of obliging members of the college community. These are the #FacesofNECC.

The 29-year-old Haverhill resident hopes to perfect his portrait photography skills while capturing the stories of faculty, staff, and students. In the style of the wildly popular and highly publicized “Humans of New York” blog by Brandon Stanton, Garcia photographs, videotapes, and interviews individuals who agree to participate in the project.

The final product has been launched and shared on Northern Essex’s social media accounts including Facebook, Instagram, and Twitter. This is a pro bono project for Garcia who is merely attempting to boost his photography skills. All of his work can be viewed at raidenphotos.com Participants give a recorded verbal agreement so the image can be used by NECC’s marketing department. 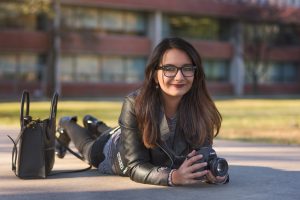 Garcia approached Northern Essex about photographing willing community members because of the ample supply of subjects.

“The photography mentors I follow like Dani Diamond and Gary Vee (Vaynerchuk) stress posting content, content, content, every day. I thought where can I safely go for a consistent pool of people that is also close to home. Northern Essex seemed like the perfect fit since I was familiar with both campuses.”

Who Is Jose Garcia?

Born in the Dominican Republic, Garcia moved to the United States when he was six. He was raised and educated in Haverhill before moving to Lawrence and attending the former Essex Agricultural High School and North Shore Community College where he studied animal science hoping to open a dog training business.

Animal training was usurped by computers. Garcia had absorbed his dad’s interest in computers. He enrolled at NECC and just a semester shy of graduating, he was sidetracked by the powers of the modern camera. 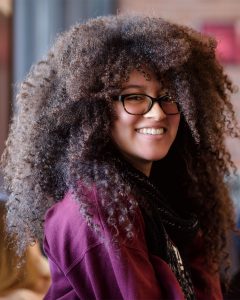 Meghan Ridley was one of Jose Garcia’s recent subjects.

While helping his wife Jeannie establish a modeling and product marketing business, his inner computer

nerd became captivated with the digital camera and all it could do. Self-taught on the camera as well as post-production software including PhotoShop and Light Room, in no time Garcia and Jeannie were shooting magazine-style photo spreads for Etsy, eBay, and a few Amazon stores.

“I suddenly realized I really like doing this and I get paid for it,” he said.

Inspired that he found his calling, he built a website, launched social media accounts, named the business Raiden Emery Photography, after their now four-year-old son, and continued to point and shoot with his camera. While his animal business never gained traction, his work with the animal kingdom transferred well to working with humans in the photography business where he makes it his business to capture individuals in their natural environs.

While he has successfully photographed nature and weddings, it’s portraiture he enjoys most. That’s where the NECC community comes in. Garcia is a self-avowed people watcher since he was in high school.

“I’ve always been taken by people’s body language in certain light,” he said. “My job has been to get the camera to see and capture what I’m seeing. I want the photo to say something.”

For additional information on this project, contact Ellen Small Davis at esmalldavis@necc.mass.edu