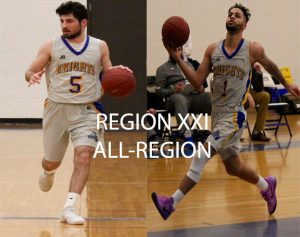 Estrella, an All-Region second team selection, led the Knights in scoring this season at an average of 15.6 points per game, starting 29 of the 30 games and twice scoring a career-high of 35 points.  A strong competitor from long range, he shot 43.5 percent from behind the arc this season, ranking fifth in three-point field goal percentages regionally. He was also second on the team in assists, at 2.3 per game.

Alagoz, a third team selection, was the team leader in assists per game (at 7.2), ranking second in assists for the region. He also led the region in assist-to-turnover ratio, at 4.8 per game. Like Estrella, he started in 29 of the team’s contests and was second in scoring, at 14.4 points per game. During the season, Alagoz converted on 51.8 percent of his field goal attempts.

The Knights basketball team concluded their season earlier this month with a loss in the regional semi-finals and finished with a 17-13 overall record. The 2017 – 18 season saw a 14-win improvement over the previous season.