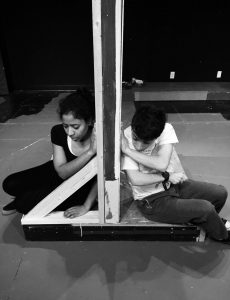 The play will be presented Thursday, April 19, through Saturday, April 21 at 7 p.m. and at 2 p.m. on Sunday, April 22, in the recently renovated Chester Hawrylciw Theater on the third floor of the Spurk Building on the Haverhill campus, 100 Elliott St.

American, playwright John Cariani, wrote the contemporary, one-act play, which is actually a collection of nine scenes. Brianne Beatrice, NECC theater professor and advisor to the Topnotch Players selected the play. Four Northern Essex students are directing different scenes in the play. The play is being produced by Dierdree Glassford of Newmarket, NH, who is also co-directing with Ben Beverage of Lawrence and Geehae Moon of Newton, NH, and Sarah Durning of North Andover. Moon is sharing stage manager responsibilities with Matthew P. Brides of West Newbury.

“The play is actually a series of vignettes,” says Beverage. “Each unrelated to each other, but with an overarching theme of love.”

While Beatrice was responsible for selecting the play and casting the 13 performers, it’s the student co-directors who are setting the tone of the play.

“Cariani is a remarkable playwright,” says Beatrice. “I’ve always marveled at his writing. The NECC Theater students are multi-talented and will bring his words to life with their designing and artistic abilities.”

“While some of us have been assistant directors before, this is the first time each of us in charge of an entire scene and the decision making process that goes with it,” says Beverage. “The set is coming together…we have a vision and we are all on the same page. Each scene is different with an overarching theme.” 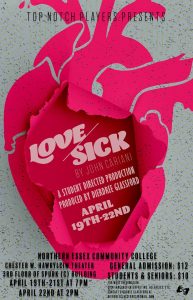 Sometimes referenced as a “darker cousin’ to Cariani’s “Almost Maine,” which Topnotch Players performed two years ago, Beverage calls it the “spiritual successor” to Maine.

“The play is all about love and how it can sometimes go wrong and sometimes go right in the most unexpected ways,” says Beverage.

Tickets are $12 for general admission and $10 for students and seniors. Tickets may be purchased at the door.