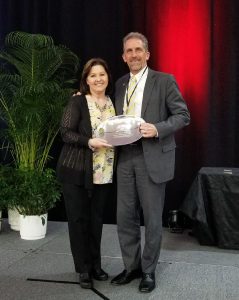 LAS VEGAS – The National Council for Marketing & Public Relations (NCMPR) has named Northern Essex Community College President Lane Glenn, Ph.D., as its 2018 National Pacesetter of the Year. NCMPR presented him the award at its annual conference in Las Vegas in March.

The Pacesetter of the Year Award honors a community college chief executive officer who has demonstrated special leadership and support in college communication and marketing.

Described as an optimistic thought leader, Dr. Glenn became president of Northern Essex Community College in July 2011. Before that, he served as NECC’s vice president of academic affairs for five years.  During his tenure as president, Dr. Glenn has significantly expanded NECC’s campuses, including a new $27 million health and technology center. He’s also expanded degree programs through partnerships with area high schools, vocational schools, and four-year colleges and universities. By successfully forming “Communiversity” partnerships with private and public four-year colleges and universities, Dr. Glenn is expanding educational access to geographically underserved populations. As a result, students can now get a bachelor’s degree within city boundaries for high-demand fields such as health care or computer science.

Dr. Glenn was the visionary for the Lawrence Partnership, a coalition of businesses and organizations committed to economic development in the city of Lawrence, MA. He served as board chair and, in its first two years, the partnership launched a multi-million-dollar venture fund for small and mid-sized businesses, formed a training consortium to improve workforce development and created a “test kitchen” for aspiring restauranteurs. Derek Mitchell, the partnership’s executive director, says, “Dr. Glenn has helped elevate the civic infrastructure of an entire community and generated new investments of time, resources and ideas about how to fully realize the aspirations of a post-industrial city.”

Dr. Glenn has created partnerships with area vocational schools, which have attracted more than $5 million in funding for new facilities and equipment and resulted in new degree programs in advanced manufacturing and hospitality and culinary arts. In June 2017, the college assumed management and operational responsibilities for the ValleyWorks One-Stop Career Center, one of 16 regional employment centers across Massachusetts. The center serves over 10,000 job seekers and 700 employers each year.

As a researcher, author and consultant, Dr. Glenn has also helped advance community colleges through his involvement on numerous regional and national boards. He served the last four years as chairman of the Massachusetts Department of Higher Education’s Task Force on Statewide Assessment; was appointed to the STEM Advisory Council by the Massachusetts governor; and is a member of the Advisory Board of the Chair Academy, an organization that provides competency-based leadership development programs for college and university leaders.

NCMPR supports the professional development of community college communicators, serving more than 1,700 members from nearly 530 colleges across the United States and Canada. It is the only organization of its kind that exclusively represents marketing and public relations professionals at community and technical colleges and is one of the largest affiliates of the American Association of Community Colleges.