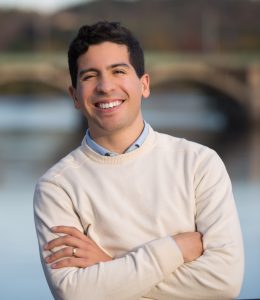 Representative Andy Vargas will be the guest speaker at NECC’s 56th commencement ceremony on Saturday, May 19.

State Representative Andy X. Vargas (D-Haverhill) will be the featured speaker at Northern Essex Community College’s 56th annual commencement ceremony on Saturday, May 19, at 11 a.m. on the Haverhill campus.

The commencement will be held under a tent on the quadrangle in front of the Sport and Fitness Center. Approximately 1,000 graduates are expected to receive certificates and associate degrees.

Vargas, a community organizer from a young age, will address the importance of civic engagement at all ages. In 2016, Northern Essex hired a civic engagement and service learning coordinator to “prepare students for engaged citizenship”. This followed the recommendation of the Massachusetts Board of Higher Education, which voted two years ago to “Include civic learning and engagement as an expected learning outcome in public higher education”.

“Civic engagement has always been a cornerstone of a solid educational foundation,” said Northern Essex President Lane Glenn. “Representative Vargas, even as a high school and college student, was a shining example of that. We want our graduates to know as they move out into the working world the importance of maintaining civic engagement.”

Born in Cambridge, Vargas’s family, originally from the Dominican Republic, moved to Haverhill when he was just six. He attended Haverhill public schools. As a young baseball player, he organized “Haverhill Baseball for All”, which collected equipment to create a free baseball league for low-income Haverhill children.

Vargas is a graduate of Boston University where he earned a dual degree in political science and international relations with a concentration in foreign policy and security studies. Committed to public service and community organizing, Vargas founded the Boston University Political Action Organization (BUPAO), which brought together students, faculty, activists, law enforcement, and elected officials to discuss and take action on some of the most pressing issues of the day. Vargas also served as the director of the department for city affairs for BU’s Student Government.

For more information about NECC’s 2018 commencement, visit the website.