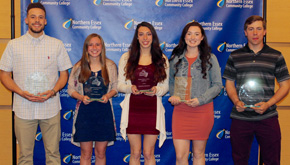 Northern Essex Community College hosted its inaugural Athletics Awards Banquet on Monday, April 23, to honor the achievements of its student-athletes and one college employee.

The evening was highlighted by the presentation of four major awards: Faculty/Staff Recognition, Unsung Hero, Scholar Athlete, and Athlete of the Year.

The Faculty/Staff Recognition Award is presented to an individual from within the college community who works outside of the athletic program, but plays a significant role in supporting student-athletes pursuing their academic and athletic endeavors.

The recipient of the award, Stephanie Wares of Dover, NH, is a member of the college’s academic advising staff. She is well-versed in the academic requirements student-athletes are held to and has a strong understanding of the additional requirements for those who wish to continue their athletic careers at the NCAA Division I and II levels.

The Unsung Hero Award is presented to one student who has made significant contributions to his/her team and/or within the campus community whose contribution is noticed more than just statistically. 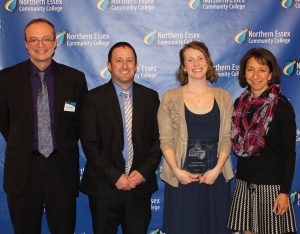 The recipient of the Unsung Hero Award was Brittany Birolini of Dracut who was a member of both the volleyball and softball teams. Her leadership on the volleyball court played a significant role in the teams overall record and improvement from the previous season. Birolini also recruited many of her volleyball teammates to join her on this year’s softball team. “Her positive attitude is noticeable beyond the playing surface and she spends much of her time around campus in the Sport and Fitness Center assisting in any way she can,” said Dan Blair, NECC athletic director.

The Scholar Athlete Award was presented to one male and one female individual who has made significant contributions to his or her respective teams while also maintaining an overall grade point average of 3.0 or higher.

The female recipient of the award, Amanda Forgetta of Mallabar, Florida, is a member of the volleyball team who led the team in many statistical categories while also boasting a GPA of 3.92. On the court, Forgetta helped lead the program back into regional tournament play. Her 108 kills, 2.12 kills per set, 338 total attempts and 130 points were all team highs this past fall.

The male recipient of the award, Nolan Steevens of Wilton, NH, is a second-year member of the baseball program who carried a GPA of 3.97. Through this past weekend, Steevens had appeared in 44 games during his career primarily at second base. After hitting .362 as a freshman he stands with a .373 average this season and currently ranks sixth on the team in runs scored with 24.

The Athlete of the Year Award is presented to one male and one female student-athlete who has performed at a high level throughout the course of his or her season(s) while maintaining satisfactory academic progress at the college.

The female recipient of the award, Olivia Mullins of Plaistow, NH, is a member of both the cross-country and track & field programs. Mullins made her collegiate debut this past fall and was the top runner on the cross-country team throughout the season. She placed fourth at the regional invitational and went on to place 52nd at the NJCAA National Championships in November. Mullins has already hit the national qualifying mark for the 1500 meters and will represent the college next month at the Track & Field National Championships.

The male recipient of the award, Corey Imbriano of Wakefield, is a second-year member of the baseball team and is the latest member of the program to commit to continuing his career at an NCAA Division I institution (University of Dayton). A first team All-Region selection in 2017, Imbriano was named the NJCAA National Pitcher of the Week following his season opening performance of six innings pitched, striking out 11 batters, allowing only three hits and not issuing any base on balls in the game. Through this past weekend, Corey is among the national leaders in a number of categories and he currently ranks in the top four in both ERA at 0.61 and strikeouts per nine innings at 14.56.