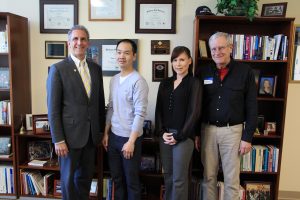 Balin, a laboratory technician on the Lawrence campus for over five years, received three nominations from work colleagues. She holds a bachelor of science in professional chemistry from Bridgewater State University.

“I have never encountered another person who exceeds (her) in attention to detail and meticulousness…the care and pride she takes in her work are not only a credit to her, but a pleasure for any of us who work with her.”

Hidy, who has worked at NECC for more than 18 years, is the accessible media specialist. A renowned graphic designer who worked with the famed photographer Ansel Adams, Hidy previously taught at Northern Essex. He holds a bachelor of arts degree from Yale University.

Hidy was nominated by Susan Martin, director of Learning Accommodations at Northern
Essex. She wrote “ A little under two years ago, we were looking for someone to help us coordinate our Accessible Media Vision in compliance with the Americans with Disabilities Act and other laws protecting individuals with disabilities. We hired Lance and he has successfully made the position his own …He has been a strong advocate… Lance has included Universal Design philosophy in his teachings, to demonstrate how all students benefit from accessible media…He has successfully developed workshops, trainings, materials and resources for the college community and beyond.”

The nomination was supported by Kim Burns, NECC dean of academic innovations and professional development, and Melba Acevedo, director, instructional technology and online learning, who credit Hidy with making Northern Essex a leader in accessible media.

Le, an instructional media specialist, is a nine-year employee of Northern Essex. He holds a Bachelor of Science degree in Art from Northeastern University.

He also was nominated by Martin who praised his work. “Minh has been an integral member of the Accessibility Media Initiative and a core team member in the Center for Instructional Technology and Online Learning. Minh has gone above and beyond developing his expertise in the area of accessible digital media. He has shared what he has learned in numerous workshops, formal presentations and individual trainings and conversations…Minh is very approachable and helps people to feel at ease with technology and new information.”

The nomination was supported by Burns and Acevedo. They praised Le for his enthusiasm and ability to “capture people’s minds and hearts”.