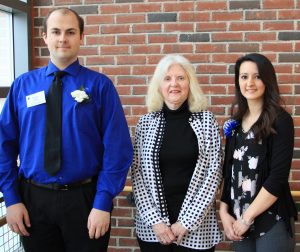 The awards, many of which were distributed during the National Meeting of Alpha Beta Gamma, highlighted outstanding achievement.

Among those honored at this year’s ceremony was former Beta Omicron Chapter President Winfield Field of North Reading, who received the Hausman Siegel Distinguished Award for exceptional chapter leadership. Field has been praised for his longstanding commitment to ABG activities. 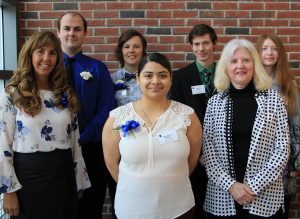 The Eva Bobrow Medallion Award, which recognizes a chapter member who has made significant societal contributions, was given to Nidia Davila Ramirez of Lawrence. A second merit honor, the Muller & Norton Outstanding Leadership Award, was distributed to Outgoing Chapter President Timothy Miles for his exemplary leadership and devotion.

Also honored this year was the Beta Omicron chapter itself, which took home the Brooks College Golden Key Award for outstanding two-year college chapters of the Alpha Beta Gamma Business Honor Society. Beta Omicron was lauded for its excellence in the areas of community service, campus service, recruitment, and financial management. The chapter has won over 88 national awards since its inception.

The following students were inducted into Alpha Beta Gamma this year: