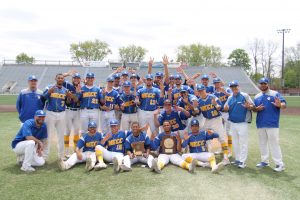 Eight of these team members were named to the All-Region First Team. The entire Knights baseball team poses with the regional trophy after its win over Quinsigamond. The team advances to the NJCAA District F series, and will host Suffolk County (NY) Community College in a best 2 out of 3 series beginning on Friday, May 18, at Trinity Stadium, Lincoln Avenue, Haverhill.

Led by catcher Riley Magee of Windham, NH, who heading into this weekend’s District F Super Regional Series leads the region in batting average (.463), RBI’s (47) and home runs (7). Magee was ranked as the region’s top player. With his .985 fielding percentage, Magee also earned a nomination for the Rawlings Gold Glove team.

Shortstop Ryan Collins of Peabody, joined Magee as a Gold Glove nominee and a member of the first team. The regional tournaments Most Outstanding Player, Collins is currently batting .407 and is second in the region in stolen bases with 21.

Center fielder Ben Irvine also of Peabody, whose 39 stolen bases in 41 attempts not only is tops in the region, but ranks second nationally. His 52 runs scored also tops the region.

A pair of freshman Kyle Hawes of Lynnfield, and Alex Almonte of Lawrence,  joined Irvine in having the Knights sweep all three outfield positions on the All-Region First Team. Hawes ranked among regional leaders in both batting average (.415) and RBI’s (33). Almonte is batting .427 and carries an on base percentage of .525

Spencer Balain also of Lynnfield, and Leo Romero of Lawrence, picked up All Region nods from their corner infield positions. At first base, Balian batted .375. Romero checks in with a .424 batting average and is third in the region in stolen bases with 18.

Three member of the Knights team also earned Honorable Mention All-Region Recognition. At second base, Nolan Steveens of Wilton, NH,  earned the recognition as he is batting .370 and scored 25 runs.

Pitchers, Richard Reidy of Amesbury,  and Ryan Sharkey of Salisbury, also earned honorable mention recognition. Reidy is second in the region in wins with five and hasn’t lost a start since the teams southern trip in mid March. Sharkey who missed a portion of the season with injury returned just before the regional tournament and earned a three inning save in the winners bracket game last Saturday. He carries a 1.46 ERA in seven appearances, five of which came out of the bullpen.

The Knights return to the field Friday, May 18, at 11 a.m. when they host Suffolk County (NY) Community College in the first game of the District F Super Regional best of three series at Trinity Stadium, Lincoln Avenue, Haverhill.