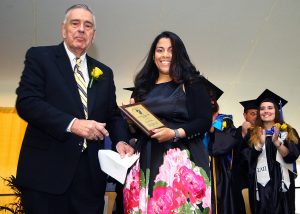 Karina Calderon, associate director of the Lawrence Partnership, was named this year’s recipient of Northern Essex Community College’s Outstanding Alumni Award during the college’s 56th Annual Commencement on Saturday, May 19.

Selected by the NECC Alumni Association, the Outstanding Alumni Award recognizes an NECC graduate who has achieved career-related success, is active in the community and/or has exemplified active support for the college’s efforts.

Calderon, a single mother of two, is a native of the Dominican Republic. She graduated from NECC’s business transfer program last year with a 4.0 GPA. She earned her degree while working full time as a referral coordinator at local pharmacy and medical equipment company and attending classes in the evening and online.

While attending NECC’s Networking Night last May, she met the director of the Lawrence Partnership, who was searching for an associate director. He was so impressed with Calderon’s achievements he hired her for the position before she had even graduated.

Today, as associate director of the Lawrence Partnership, she contributes significantly to the economic development of the City of Lawrence. Most recently, She was nominated to and accepted for a position on the NECC Alumni Board.

“She is considered by peers and colleagues to be someone who demonstrates an unyielding devotion to hard work and achievement and we are proud to have this opportunity to recognize her today,” said Bill Klueber, chairperson of the NECC Alumni Association, who presented Calderon with the award during the ceremony.

Northern Essex offers an associate degree in business transfer preparing students to transfer into four-year degree programs at public or private colleges or universities or to transition into the work world.

The Lawrence Partnership is a private/public sector collaboration for the economic development and general improvement of the City of Lawrence that was launched in 2014.