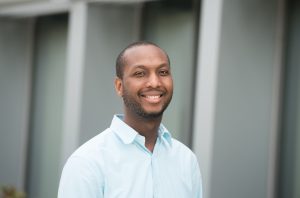 This fall, Northern Essex Community College graduate Emeka Enwere will be one step closer to his dream of becoming an information technology professional. The Haverhill resident, originally from Nigeria, has earned a full ride to UMass Boston through the Foster Furcolo Scholarship program, which offers tuition awards to eligible students of Massachusetts public two-year colleges. He was selected at the recommendation of President Lane Glenn and approved by a committee of UMass representatives.

Only one graduating student from each of the commonwealth’s public community colleges is selected annually for the scholarship.

Enwere, a high honors graduate, and the first in his family to attend college, received his Associate of Science Degree in Computer & Information Sciences with a focus on Information Technology (IT) from Northern Essex in May. He will enroll in UMass Boston as an IT major with hopes of stepping into a position as a network and computer systems administrator.

The scholarship, he feels, will prove instrumental in getting him closer to his desired career.

“This award means everything to me,” he says. “It will reduce the financial stress associated with attending a four-year college and will help me accomplish my goals.”

In his letter of support, President Glenn lauded Enwere’s strong work ethic and determined spirit as reasons for his selection.

“Emeka exemplifies the community college system’s success in fulfilling the educational mission envisioned by Governor Furcolo,” he writes. “… In spite of the many obstacles he has faced, Emeka has taken on an academically rigorous course-load and taken full advantage of the opportunities he has had here at Northern Essex Community College.”

The Foster Furcolo Scholarship is a UMass Boston-based transfer award given to graduating community college honors students. It was established in honor of the late Foster Furcolo, who served as Massachusetts governor from 1957 to 1960.