YWCA’s 35th Annual Tribute to Women: A Woman of Perseverence 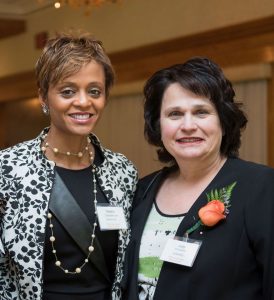 Noemi Custodia-Lora (Left) and Judy Chmielecki (Right) pose for a photo during the 35th Celebration of Tribute to Women Awards Luncheon, YWCA of Greater Lawrence, Andover Country Club in May. Custodia-Lora nominated Chmielecki for the award.

Judy Chmielecki, a resident of North Andover and adjunct professor of English as a Second Language (ESL) at Northern Essex Community College, was one of 19 women to be honored at the YWCA’s 35th annual Tribute to Women luncheon last month.

Chmielecki was nominated for the award by Noemi Custodia-Lora, vice president of NECC’s Lawrence Campus and community relations. The award honors women throughout the Merrimack Valley for their contributions to work and community.

Chmielecki has been teaching English as a Second Language at NECC for over 18 years.

“She is well loved by her students who appreciate her ability to present information in a clear and interesting manner and help them develop their language skills,” wrote Custodia-Lora.

Chmielecki is the coordinator of the ESL Social Learning Club at NECC, and also partakes in a variety of other voluntary departmental activities including curriculum development, textbook selection, and the new student intake process; demonstrating her commitment to student learning.

In 2013, Chmielecki was the recipient of the National Institute for Staff and Organizational Development (NISOD) Awards, a national honor which recognizes outstanding faculty and staff in the country’s community colleges.

In addition to her contributions at NECC, Chmielecki has been involved with the Merrimack Valley Immigrant and Education Center for over 10 years, and her nomination was supported by Laurie Mancinelli, chairperson of the board at the center.

When the executive director of the Merrimack Valley Immigrant and Education Center resigned two years ago, Chmielecki took on the role of executive director herself, spending well over 40 hours per week, weekends and nights, working tirelessly and free of cost, according to Mancinelli.

“No matter where she is, what she is doing, or how busy she is, Judy will always make time for her family, for her friends and for any charity that needs her.”

Chmielecki contributed to NECC and worked for the center, advocating for students, teachers, and the immigrant community while taking care of her four children as a single parent.

“Judy is a phenomenal mom, a tremendously loyal friend and the most giving and charitable person I know and I cannot imagine anyone else who would be better suited to be honored by the YWCA.” said Mancinelli